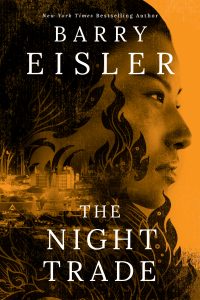 Followers of the “Me Too” movement (or “#MeToo” used in social media) may find Barry Eisler’s latest thriller, THE NIGHT TRADE gratifying to see justice done. The movement has been used to demonstrate the widespread prevalence of sexual assault and harassment, especially in the workplace.

Eisler, the New York Times bestselling author, brings back Livia Lone, the sex-crimes detective from the popular 2016 novel by that name to continue her mission of vengeance against those who raped her as a child and sold her into a human trafficking ring.

In this AUTHORLINK AUDIO INTERVIEW, Barry talks about what motivated him to bring back the popular female character to continue highlighting the problems of sex trafficking in both Thailand, where the book is set, and in the U.S. The work is among more than twenty novels and essays by  Eisler, a former CIA agent and New York Times bestselling author.

Barry Eisler’s signature combination of edge-of-your seat action, exotic locations, realistic spycraft, steamy sex, and protagonists who are “the stuff great characters are made of” (Entertainment Weekly) has made him one of America’s most popular and well-respected thriller writers. His series, featuring anti-hero John Rain, black ops soldier Ben Treven, and now sex-crimes detective Livia Lone, have received rave reviews, won numerous literary awards, hit various “Best of” lists, and have been translated into nearly twenty languages to date.

In THE NIGHT TRADE, Livia Lone is on her continued path to vengeance, as she teams with a former marine assassin to take down the Bangkok kingpin who trafficked her as a child.

For Livia, a position with a government anti-trafficking task force is a chance to return to Thailand to ferret out Rithisak Sorm, the kingpin behind her own childhood ordeal. But after a planned take-down in a nightclub goes violently awry, Livia discovers that she’s not the only one hunting Sorm. Former marine sniper Dox has a score to settle, too, and working together is the only way to take Sorm out.

Livia and Dox couldn’t be less alike. But they share a single-minded creed: the law has to serve justice. And if it doesn’t, justice has to be served another way.

What they don’t know is that in threatening Sorm, they’re also threatening a far-reaching conspiracy—one involving the highest levels of America’s own intelligence apparatus. It turns out that killing Sorm just might be the easy part. The real challenge will be payback from his protectors.

ABOUT BARRY EISLER
Barry Eisler spent three years in a covert position with the CIA’s Directorate of Operations, then worked as a technology lawyer and startup executive in Silicon Valley and Japan, earning his black belt at the Kodokan Judo Institute along the way. Eisler’s bestselling thrillers have won the Barry Award and the Gumshoe Award for Best Thriller, have been included in numerous “Best of” lists, have been translated into nearly twenty languages, and include the #1 bestseller Livia Lone. Eisler lives in the San Francisco Bay Area and, when he’s not writing novels, blogs about torture, civil liberties, and the rule of law. For more visit Barry’s website:  www.barryeisler.com

Thomas & Mercer is the Mystery, Thriller, and True Crime Imprint of Amazon Publishing.

THE PLAYS THE THING: Part I By Dale Griffiths Stamos