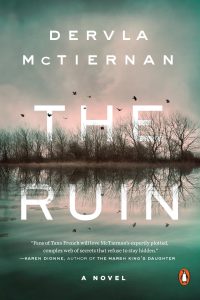 The Ruin, Dervla McTiernan, Penguin Books – When Cormac Reilly was a rookie, he responded to a call for help from a teenager named Maude – her mother was dead. Twenty years later, as a seasoned detective recently moved from Dublin to a smaller city, the case is reopened for him through the death of Maude’s brother. Was it suicide? Murder? Did it relate to his long-dead mother? Even more puzzling to Cormac, why do the local police seem more interested in dismissing the case than investigating?

AUTHORLINK: What gave you the idea to start this story?

The Ruin started for me with a single image – a brother and sister, sitting on the stairs of a crumbling Georgian mansion in the middle of the Irish countryside, holding hands. Maude is fifteen and Jack is five. I knew only that Maude loved Jack, that she’d always protected him, but that at that moment she is very afraid. It’s getting dark outside, there’s no electricity in the house and Maude doesn’t know if she can save Jack this time. That was all I had!  I had to write the book to find out what happened next.

AUTHORLINK: How did you begin to put together the pieces of the puzzle? (without revealing any spoilers) Did you know who did it from the start? Did you know why?

The early drafts of the book had a completely different ending, but it just wasn’t working.

I definitely didn’t know. The early drafts of the book had a completely different ending, but it just wasn’t working. I think it started to come together properly when I really went back into the characters, into the setting, and let the story happen a bit more organically. You know, the story is set in an Ireland that changes very quickly and very dramatically in a short period of time. Those changes impact the lives of the characters in a way that creates natural conflict. In the early drafts, I think I was trying too hard, like an overly-controlling director. It took a few drafts for me to realize that I needed to loosen the reins a bit, to let the characters drive the story.

AUTHORLINK: Did you know how Cormac would solve the crime? Did you have to go back and make revisions so earlier parts of the story would match up with what you thought of later?

I knew parts of it but not all, and I definitely had to make revisions…

I knew parts of it but not all, and I definitely had to make revisions to make sure that the investigation followed a logical progression, with information coming to the reader at the right time and in the right way. Writing a crime novel sometimes feels like weaving a tapestry, except you have to do it by hand rather than with a loom and you are holding so many threads at the same time, trying to draw them together in some kind of order…it’s a challenge!

AUTHORLINK: What did you write before The Ruin that helped you create a successful story?

The Rúin is my first novel. Half-way through writing my first draft of The Ruin I broke off to write a short-story, but otherwise it was the first piece of fiction I wrote, and I have to admit my process was a little all over the place. I think I took that old maxim about terrible first drafts a little too seriously. My first draft meandered all over the place. I just started with a blank page and an idea and kept going until I got to the end. I could tell in reading it that it wasn’t very good, but I struggled to pinpoint exactly what was wrong. I had so much to learn. I went to writing workshops here in Perth, which helped, but I learned even more from reading books on the craft of writing, and then re-reading my favorite authors and trying to understand how they do what they do. For the second draft, I scrapped 90% of the first and started again. For the third draft, I think I only scrapped about 40%, so that was progress! I kept going like that, scrapping and rewriting until it started to feel a little bit more like something worth submitting.

AUTHORLINK: How did the recession affect your career and help with your success as a writer?

The recession was very difficult for us. I was a lawyer in Ireland, and my husband was a civil engineer. Both professions were hit very hard in the recession. We went from being a super-responsible, high-earning couple living in our forever-home to basically being broke. We emigrated to Australia in October 2011. Our daughter was two and I was thirty-six weeks pregnant – looking back it was such a crazy choice to make – to move twelve thousand kilometers away from your family to a country where you know no-one, with a baby on the way!  But there was something so incredibly freeing about that decision, and it was very seductive. I think we both felt that we had always played by the rules, we’d made big decisions about our lives based on what we thought other people expected of us. In moving to Australia, we were taking control of our lives, and pursuing what we really wanted to do. For me, that was writing. When I went back to work it was part-time so that I would have enough time for the kids, and to write at night when they were in bed. We’ve been in Australia for seven years now, and we’ve worked very hard, but the country has been incredibly good to us, and we’ve enjoyed great success.

AUTHORLINK: There are still some unanswered questions about the Galway police force. Will we be seeing more of Cormac Reilly and the others?

Yes! The second book in the series, The Scholar, will be published next year, and the reader will learn more of Cormac and Emma’s backstory. Some of the other police characters in The Ruin – Carrie O’Halloran and Peter Fisher to name just two – will also return.

AUTHORLINK: How did the Theakston Crime Festival go and what are some other honors you’ve already received?

If you ever get the chance to go to the Theakston Old Peculier Crime Festival – go! It’s something else. I flew in after about 26 hours travel and arrived to a sunny beer garden already full of writers and readers. I was meeting someone, so I took a seat, and literally thirty seconds later Lee Child was standing about two feet away from me, chatting to readers. It was the most surreal experience, to be sitting there in the sunshine with my author lanyard. The panel with Val McDermid and the other New Blood debuts was obviously the highlight, but a close second was just hanging at the festival bar. I’ve never been to a literary festival before where there were as many writers in the bar as there were readers! It felt like every crime writer in the UK and most from Ireland had come, regardless of whether they were in the festival or not, just to hang out, have a drink, and catch up.

AUTHORLINK: Do you have any advice for would-be crime story writers?

…I find the process of writing so fascinating.

Oh god, so much advice!  I’m afraid I would bore any emerging writer to tears on this subject because I find the process of writing so fascinating. I’m going to assume that I’m talking to people who write first and foremost because they love it (there really is no other reason to do it), that they are passionate and voracious readers of a wide range of books, and that they are professional and prepared in their dealings with industry professionals like agents. Assuming all of those boxes are ticked, the very best advice I can give is to wait until your manuscript is as close to perfect as you can get it before you submit. This is much harder than it sounds. When you’ve worked for years alone and you feel the work is done it’s so hard to hold back, but really, you only get one chance at a submission. Put it aside, rework it, and when you feel that you can’t think of a single other thing you can do to improve it, that’s the time to send it off. If that’s the stage where you are, I wish you the very best of luck. There’s a whole community of supportive crime writers waiting for you to join us.

About the Author: Dervla McTiernan gained confidence to write a novel after winning a Sisters in Crime short story contest. The Ruin has been optioned for television by Hopscotch. It was one of LitHub’s Most Anticipated Crime Mystery and Thrillers of 2018 and an Amazon Best Book of July. Her second novel, The Scholar, is due out in the U.S. in May 2019. McTiernan lives in Perth, Australia with her husband and two children 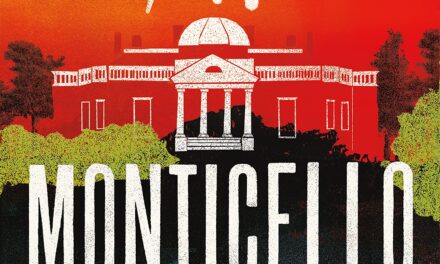