Intrigue and Dangers in the World of the Djinn 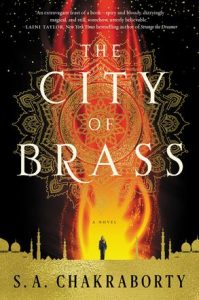 The City of Brass, S.A. Chakraborty, Harper Voyager – A young woman in eighteenth century Egypt survives by using her wits and stealing from her victims.  Nahri doesn’t believe in magic, but she does have tricks for healing. One night while performing what she thinks is a sham zar incantation, she calls up an ifrit – an evil supernatural being who is now out to get her. She also releases a djinn warrior, Dara, who becomes her protector and guide on the perilous journey to the mystical city of Daevabad where he tells her she will be safe from the ifrit. But even as the pair are encountering helpful and deadly magical beings on their journey, all is not well in the City of Brass. Resentments simmer among the coalition of djinn tribes held in check by a powerful king, while the idealistic younger prince hopes to help the oppressed. The arrival of Dara and Nahri could be the spark that sets things off.

AUTHORLINK: What were your first thoughts on what turned out to be this story?

This story began as a bit of a world-building experiment, actually; sort of “historical fan-fiction” . . .

CHAKRABORTY: This story began as a bit of a world-building experiment, actually; sort of “historical fan-fiction” about the medieval Islamic world (an academic and personal interest of mine) with magic thrown in. I wanted to recreate some of the fantastic places and wild politics of the societies I studied.

AUTHORLINK: Are the details of the djinn world – the different tribes, their appearance and way of life, the ifrit and peri, for instance – your invention or is it mostly established djinn lore?

CHAKRABORTY: They’re both. As this started out more as a mental game, I decided that established lore and historical facts were my rules. If lore said Suleiman punished and imprisoned djinn, then that was happening…but I could imagine the consequences for my djinn characters and how something so traumatic might have shaped their culture.

AUTHORLINK: How did your characters grow from your first conception of them?

I gave them a lot more flaws for certain! I love deeply human (well, sort of) and morally gray characters . . .

CHAKRABORTY: I gave them a lot more flaws for certain! I love deeply human (well, sort of) and morally gray characters; I just find them more relatable. I didn’t want to lose sight of the fact that even if my characters were magically empowered beings living two hundred years ago, they were still people who struggled with things like imposter syndrome and how to get along with their family, not to mention the far more devastating events of war and occupation.

AUTHORLINK: This is a complex and long novel – at over 500 pages. As a first-timer writing and trying to sell your novel, did you run into resistance to its scope and length?

CHAKRABORTY: I ran into a little resistance while querying for an agent, and I would strongly advise people doing so to be aware of the typical lengths for their genre. Mine was epic fantasy, so it wasn’t a deal-breaker, but I did have a number of agents tell me they’d be interested if it wasn’t so long. However, it wasn’t the insurmountable hurdle that I feared, and once I had an agent, it wasn’t an issue with any of the editors to whom we submitted. Indeed, the book ended up going to auction in a week.

AUTHORLINK: Did your published book differ much from your first draft?

From the time I sat down to turn what had been a world-building project into a novel, then to what it is now, I’d say it changed a fair amount.

CHAKRABORTY: From the time I sat down to turn what had been a world-building project into a novel, then to what it is now, I’d say it changed a fair amount. The general plot and main characters stayed the same, but their arcs and personalities sharpened, and the pacing picked up quite a bit. Both my agent and my editor helped me immensely as well.

AUTHORLINK: What writing and other experiences helped you to advance to where you could sell your novel to a publisher? Did you write any other novels before this one?

CHAKRABORTY: This was the first novel I’d ever written. I’d toyed with some short stories while doing the world-building for it, but honestly a lot of the improvement came from working with my writers’ group who were both merciless and somehow kind. Learning how to parse critique and use it effectively is a huge part of this field. And I took plenty of time in fixing it. It was something I did that I enjoyed for several years before attempting to publish it.

CHAKRABORTY: I think speculative fiction is best described as anything with a fantastic, supernatural, or futuristic element, whether that be contemporary fantasy, historical horror, or far-future space exploration. Fantasy, especially with historical elements, makes up the majority of my work, but I occasionally write sci-fi and horror, so I think the description of me is apt.

AUTHORLINK: I’m guessing that there might be a sequel in the works. What can you say about it?

CHAKRABORTY: There is! It’s called The Kingdom of Copper and is set to be published in January 2019. I can’t reveal too much but will say we explore a lot more of the magical city of Daevabad as well as seeing one of our characters have some adventures in the human world.

About the author: S. A. Chakraborty is a New Jersey native residing in Queens with her husband and daughter. She wrote much of her novel while managing an obstetrics practice. She’s a history buff and enjoys politics, Islamic art, hiking, knitting and cooking complicated medieval meals. 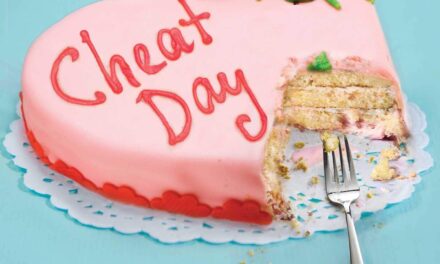 The Listener Explores Identity and Truth – 2015