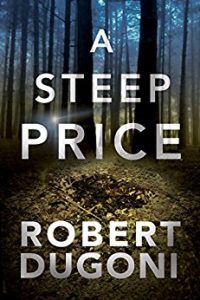 In the sixth novel in Robert Dugoni’s bestselling Tracy Crosswhite Series, A STEEP PRICE (Thomas & Mercer; June 2018), Tracy is called in to consult after a young woman disappears. She has the uneasy feeling that this is no ordinary missing-persons case. When the body turns up in an abandoned well, Tracy’s suspicions are confirmed. Estranged from her family, the victim had balked at an arranged marriage and had planned to attend graduate school. But someone cut her dreams short.

In this AUDIO interview, Authorlink talks to Robert Dugoni about what motivated him to write about the effects of cultural differences in his newest novel and explains why this was the toughest book in the series to write. He also shares details about one of his books, MY SISTER’S GRAVE, has been optioned as a television series.

In A STEEP PRICE, solving the mystery behind the murder isn’t Tracy’s only challenge.

The detective is keeping a secret of her own: she’s pregnant. And now her biggest fear seems to be coming true when a new detective arrives to replace her. Meanwhile, Tracy’s colleague Vic Fazzio is about to take a fall after his investigation into the murder of a local community activist turns violent and leaves an invaluable witness dead.

Thomas & Mercer is the Mystery, Thriller, and True Crime Imprint of Amazon Publishing.

Two careers are on the line. And when more deadly secrets emerge, jobs might not be the only things at risk.

“Fully developed characters and a fast-moving plot that builds to a shocker of an ending distinguish this crime novel.”
—Publishers Weekly

“Dugoni winds up both cases satisfactorily, if not very compellingly or brilliantly…”
—Kirkus Reviews

Robert Dugoni is the critically acclaimed #1 Wall Street Journal, and #1 Kindle bestselling author of the Tracy Crosswhite Series, including My Sister’s Grave, Her Final Breath, In the Clearing, The Trapped Girl, and Close to Home. The Crosswhite Series has sold more than 2,500,000 books worldwide, and My Sister’s Grave has been optioned for television series development. Dugoni is also the author of the bestselling David Sloane series, which includes The Jury Master, Wrongful Death, Bodily Harm, Murder One, and The Conviction; the stand-alone novels The Extraordinary Life of Sam Hell, The 7th Canon, and Damage Control; and the nonfiction exposé The Cyanide Canary, a Washington Post Best Book of the Year; as well as several short stories. He is the recipient of the Nancy Pearl Award for Fiction and the Friends of Mystery Spotted Owl Award for best novel in the Pacific Northwest. He is a two-time finalist for both the International Thriller Award and the Harper Lee Prize for Legal Fiction and has been nominated for the Mystery Writers of America’s Edgar Award. His books are sold worldwide in more than twenty-five countries and have been translated into more than two dozen languages, including French, German, Italian, and Spanish.

Novelist Elizabeth Berg Relies on the Power of the Unconscious