Buy This Book Via Amazon.com

In today's world, witnessing violence, both personal and societal, has become a common experience. Kaethe Weingarten, Ph.D., Harvard Medical School-based trauma expert, wanted to prove that we, as individuals, have the power to lessen the impact of witnessing trauma in our society-indeed perhaps the power to turn bad events toward good. The result is a compelling book of hope called COMMON SHOCK, released by Dutton on the second anniversary of the 9/11 terrorist attacks.

Dr. Weingarten is a clinical psychologist and family therapist who has worked for 20 years in the areas of violence and sexual abuse, and served as a human rights activist in Kosovo and South Africa.

Conceived from her work in the trauma field, COMMON SHOCK aims to help people see the connections between their own responses to the smallest events (whether in two-person relationships or local communities) and the wider social problems facing our society today.

The witnessing of trauma

on the individual is intricately connected to the effects

Society creates conditions in which families suffer. Likewise, families create conditions that impact society, Weingarten proposes. The witnessing of trauma and its psychological and biological impact on the individual is intricately connected to the effects upon society, she says. An obvious example is 9/11. It is possible to change individual responses to trauma, and thus to affect the impact upon the larger circle of society, she contends.

"After the bombing of Kosovo and the mass exodus of 850,000 people a year later, I saw a young woman olding a two-year-old child everywhere she went. The baby's grandmother explained that a soldier had put a gun to the baby's head a year ago, and the mother would not put the child down. The whole family was traumatized by the terrifying experience. The entire group did not know how to help the young mother deal with her terror. "When we make a decision

to pay attention to the event,

to become aware of the impact upon us, we can take better care of ourselves . . ."

Weingarten So, what should individuals do to lessen the impact of having witnessed violence?

"Practice simple awareness," Weingarten suggests. "We are bombarded by wide range of events, pictures, sounds. For many people, exposure to violence is as commonplace as wallpaper. They barely notice it's there. Yet violence does have a cumulative effect upon us, biologically and psychologically. When we make a decision to pay attention to the event, to become aware of the impact upon us, we can take better care of ourselves and interact with our families and society in more loving ways. It's most important to decide whether we want to turn the traumatic experience into something effective, to find ways to make a positive contribution.

"I have seen people do this in amazing ways," said Weingarten. "For example, Arn Chorn Pond, a Cambodian genocide survivor was forced to murder people, and was one of the few in his family to live through the conflict. He was adopted and came to U.S. with serious psychological problems. After much support from his adoptive family, he decided to use his expertise as a flute player to teach Cambodian children the music and dance of his native country. Only ten per cent of the country's musicians had survived, thus the country was in danger of losing some of its musical heritage. He now devotes his life to recording master performers and he has started a teaching program that brings together studetns and masters in the traditional mentoring relationship.

Weingarten  "It is very important that we slow things down, help trauma victims work through the process of mourning, and help them manage their losses," says Weingarten.

"Sometimes a simple act of kindness can have far-reaching effects. I remember a woman who came to one of my trauma workshops in South Africa. An African minister for an AIDS orphans shelter asked if anyone could give him a ride back to his township. The woman gave him a lift, and ended up volunteering at the orphanage. She later wrote an article about her experience which triggered a fundraising effort in the United States to help pay for funerals of these AIDS orphans. All because she volunteered to give the minister a ride."

Another way to have a positive effect against violence is to listen effectively to the witness, says Weingarten. "Let the person who has experienced a violent act know that you care. Let them know that you really want to hear what happened to them. Then, when you say that, listen for what that person is trying to convey, not what you think they mean. You must clear your mind of preconceptions and be available to what the other person needs to get off their chest.

". . . I believe that hope is the responsibility of the community and something that we do together.

"Compassionate witnessing is one of the ways I do hope with others. The effects of hope are profound, as are the effects of hopelessness. Just as food, water, and security must be equtably distributed, so, too, must hope." "The book has

a hope and a

Weingarten Weingarten has authored or co-authored five other books related to her profession, but COMON SHOCK "is the book I really poured my life experience into. It integrates the personal and professional experiences I've had for fifty years, since the age of six to now. This book has a hope and a dream attachedthat it can somehow make a difference in the world."

It was a dream destined to be shared with the reading public. Weingarten's agent, James Levine at Levine Greenberg, submitted the book proposal to several publishers ten days after September 11, but it had been in the works for a decade. "During the period right after September 11, people really understood what witnessing means, that not only the victims suffer, but so do those who witneess those acts."

Several publishers made offers, but Weingarten chose Dutton because she felt the editor Mitch Hoffman really understood the book. "It was a small house and I felt they would do the right thing with the book, "said Weingarten. "They supported me in including more than 100 pages of end notes, which I felt extremely important to the book. The end notes represent a parallel narrative. They show that the work is backed by science and that that research is readily accessible to those who want the information."

It took Weingarten a year to write the book, while continuing her busy practice. "I put in many 16 hour days," she said. "I began writing at 5 a.m. each day, wrote til noon, took a two-hour break, then saw patients until 6 p.m.

Now through Thanksgiving, she'll be busy on a seven-city tour for COMMON SHOCK.

And what would she advise to new writers struggling to break into the business?

"A writer should feel passionate about his or her topic. If you've submitted proposals and think the topic is important, but haven't been successful, rethink the angle of your story, but, whatever you do, stay with the project. And, never give up!

Stacey Barney, Penguin Children’s Editor Talks About Her Job and What Writers Need to Know

Hollywood Cartoonist and Screenwriter Jack Enyart Talks About His Career 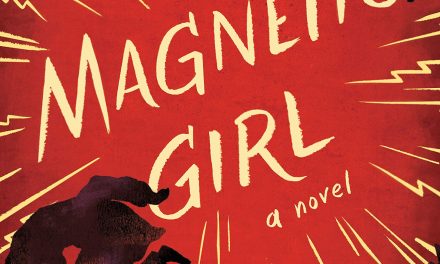 The Magnetic Girl: History and Imagination, a Compelling Tale