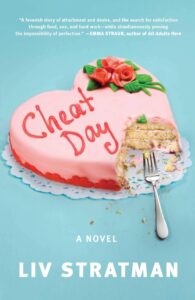 Liv Stratman’s Cheat Day takes a fresh look at love, sex, marriage, work and the quest for the perfect diet. The protagonist Kit, a married thirtysomething from Brooklyn, engages in an affair at the same time she is struggling to complete the Radiant Regimen, a seventy-five-day cleanse. Mourning her grandmother and feeling like her job at her sister’s bakery is not enough, Kit seeks to understand just what she can expect from life.

“I’ve been telling myself stories my whole life.”

“I’ve been telling myself stories my whole life. When I was little, all my toys had intricate backstories, and I could spend hours whispering on the floor as I enacted novelistic little comedies with my Slyvanian Family figurines,” said Stratman. “I think these are really common beginnings for writers, and as I got older I became a passionate reader.”

In college at University of Cincinnati, she took undergraduate fiction workshops with Michael Griffith and Leah Stewart, who encouraged her to pursue writing professionally and challenged her to keep working on craft and voice.

“The most important advice I ever got was from Leah Stewart, who told me that of the talented students she’d worked with, the difference between those who went on to publish and those who didn’t was merely who kept writing. I really think if you are driven to write–to make any art really–gaining the confidence to do so is more valuable than any connections or luck or money or whatever else we think we need to work,” said Stratman.

Her influences include Lorrie Moore, Mavis Gallant and Alice Munro.  “Moore captures a certain intellectual hysteria of overeducated white women that I find so funny and (as an overeducated white woman myself) true.” Stratman loves Mavis Gallant and Alice Munro for “the quiet way they explore gender roles, feminine ideals, and individual women’s struggles inside the capitalist experiment.”

“It was full of evocative, sensual detail: the smells, the colors, and the accents and particular speech patterns of the Brooklynites who worked and dined there. It was an inspiring place for me. So the novel started with the setting and the plot–Kit’s affair and her obsession with dieting–came less organically,” said Stratman.

It took time for Stratman to figure out the book’s main plotlines. “I had all these funny scenes between Kit and her family, but they lacked tension. I decided she should have an affair at a certain point, and then, about two drafts later and a full year later, I realized a lot of body politic and modern wellness ideas came up for Kit, and I started to explore that. This is all to say, it took a long time and the book is the distillation of many ideas, worked through and rewritten over and over.”

She starts her writing with characters, sometimes inspired by people she comes across in life.  “Once a character comes into my head and stays awhile, I know it’s time to start writing about them,” said Stratman.

Cheat Day focuses on the Bay Ridge area of Brooklyn, but Stratman says her main focus is on the “small domestic issues in the first person.” “My characters are telling the story of their own lives, and our life stories exist in the context of our surroundings. Setting and character are so melded together for me, as a writer, that I struggle to explain myself when I talk about setting.”

Setting the novel in Bay Ridge, said Stratman, was useful for exploring the provinciality of enclaves inside a metropolis like New York. Kit returns there after going to school in Manhattan. “She wants to belong the way she did, but, as they say: You can’t go home again. It was important to have Matt and Violet come from other places to challenge Kit’s limited understanding of her own good life. Whether it’s true for Kit, Brooklyn is a destination for young people from all over the world. It felt important to have characters bring that into the story in order to stay true to the setting,” said Stratman.

Her greatest challenge was figuring out how to end the book. “The last third was kind of a runaway train–I wrote it pretty much whole cloth in about 15 days–except the last few chapters. . . . I got over that by writing it one way and then writing it another and then another, and reading through to see what felt the truest and most worth pursuing.”

“…being able to let go, and to see what doesn’t end up working…was the thing that turned me…into a professional.”

She tried the story multiple ways and was willing to scrap what she’d done and start over. “That can be hard, because of all the time, and there’s always good stuff in what gets tossed out, but being able to let go, and to see what doesn’t end up working as equally important and requisite to finding what does work, was the thing that turned me, after many, many years, from a talented amateur into a professional,” said Stratman.

She offered an insightful look into the editing process:

“You have to be realistic, and proud of your work but not too prideful in general.”

“Rarely does selling a book mean a writer has sold the book that will be published, especially a debut novel. Typically, the book your agent sells is the first draft as far as your editor is concerned, even if you know it to actually be the 3rd or 30th draft! It is important to be patient with the process, and open-minded. In the end, the book you publish will look very different from the book you set out to write. That’s kind of the point–that’s why we talk about the writing process rather than, say, the writing spontaneous combustion. You have to be realistic, and proud of your work but not too prideful in general. The first draft is never going to be good enough to publish, so don’t try to get good at first drafts. Work always, and hardest, and with the biggest investment, on revision.”

Her advice for writers is equally powerful. “Get attached to the habit of writing, not the words on the page. The words on the page are just symbols, and they aren’t precious. But an established, disciplined practice of writing regularly? That is the only thing you need.”

With Cheat Day on bookshelves, Stratman is at work writing another novel–this one set on Long Island’s Great South Bay. The main character is a former champion surfer who suspects her younger brother of killing his pregnant girlfriend. “Like Cheat Day, it’s funny and filled with less-than-heroic characters, but it is more suspenseful. The stakes feel higher.”

Liv Stratman is a writer and humorist whose first novel, Cheat Day, was published by Scribner in 2021. She organizes an online network of debut writers and serves drinks and book recs at the East Village’s Book Club Bar. The rest of the time, she is at work on her second book. She lives on Long Island.

Valerie Martin, Author of the Stunning New Novel, Trespass, Talks of How She Conceives Her Ideas