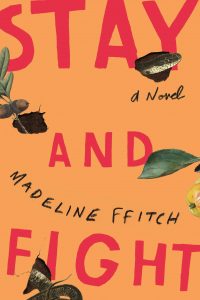 Helen comes to homestead in Appalachian Ohio with her boyfriend, Shane, who deserts her before they face the first winter. Her neighbors, Karen and Lily, help her learn to live off the land. In turn, she offers to share her home with them because they must leave their women-only homestead after the birth of their son. They struggle to build a life together, not only to survive but to get along. When son Perley goes to school with a snake-bit face, the government steps in and threatens to undo their way of life.

AUTHORLINK: What was the first thought you had that led you to this story?

“…most people felt a fondness for the snakes and had an expectation of cohabitating with them.”

FFITCH: A decade ago, when I moved to Appalachia Ohio, I paid attention to each story my new friends and neighbors told about black rat snakes, and I began to collect them. What struck me was not only that people would describe snakes in silverware drawers, in linen closets, in the attic, on shelves, and yes, even in bed, but that most people felt a fondness for the snakes and had an expectation of cohabitating with them. When I began to imagine the people with whom the snakes had complex relationships, a story began to take shape.

AUTHORLINK: How did your characters first come to you? Did they change much from your original idea?

FFITCH: I am always interested in putting unlikely personalities together on the page, asking them to talk to each other, and seeing what happens. Because of this, though I might begin with characters that feel familiar to me, what ends up happening between characters is always unexpected. I do believe that the possibilities for who can forge relationships and the ways people can relate to each other are rich and varied and will always surprise us.

AUTHORLINK: This is maybe a trivial question, but why does Helen always refer to Shane as “my boyfriend” rather than use his name?

“…in some basic way, they were never real to each other.”

FFITCH: It’s funny that you noticed that! To me, this is the best way for Helen to describe her relationship to Shane, and it becomes something of a ritualized tic for her. More than she ever really knew him as a particular person, he fulfilled a role in her life that she thought she needed, a boyfriend. I think that though these two people engaged on a committed and serious project together – making a home from scratch on raw land – in some basic way they were never real to each other. I also think that her never calling him by name conceals some deep bitterness about the way that he left her.

AUTHORLINK: Did you plan most of the story from the start or did it evolve as you wrote?

FFITCH: I did not plan the story. I know the place. I know the plants and the animals, the water, the hills, the roads, the trees, the particulars of daily work. The rest of it, though, is a process of getting to know people, like you would get to know anyone. I am putting my characters together with each other and with place, and learning about them as I go. It’s important for me to keep story open, intuitive, and led by relationship, work, and image, rather than try to control a story too much.

AUTHORLINK: Have you experienced living off the land and felling trees? Is your own life much like your characters’ lives?

FFITCH: Yes, my family lives on a piece of land much like the one in the story, off the grid and in a house we built ourselves, solar powered and spring fed. My first job when I moved to the area was running chainsaws on the ground for an arborist.

AUTHORLINK: What research did you do? Did you get most of your help from people who live in Appalachian Ohio?

FFITCH: Writing this novel was a great opportunity to learn more about and honor the skills and knowledge of people that I know and am in community with. I wrote myself into corners, realized I didn’t know enough to continue, and then took friends out to lunch or to coffee, visited them in their gardens or their houses, shared meals or talked on the phone. These friends, family, and neighbors included a clinical herbalist, a wild foods expert, a pipeline worker, a public defender, several social workers, and more. My fact-checkers were arborists, carpenters, whittlers, nurses, and eco-defenders. People from many different backgrounds and walks of life were kind enough to read early drafts of the book and give me feedback.

AUTHORLINK: What are the major themes brought out in the story?

FFITCH: I wanted to tell a story about people striving to live on their own terms and leveraging whatever amounts of power they have to do so, even when larger forces seem to be overwhelming. I believe that individuals and communities taking any opportunity they can, however small, to act autonomously and with integrity, reminds people that they are human and that being human is also wild.

I also wanted to tell a story that observes conflict without disposability, in which the people you find the most difficult also might be the people you come to trust and rely on, and that building affinity through grave conflicts is possible. This is something I see in families, partnerships, organizing relationships, and rural lifeways every day.

AUTHORLINK: What do you hope readers will gain from the book besides enjoying the story?

FFITCH: I hope readers will feel that the world and human relationships are full of possibility and that we can and should resist stories that retread tired stereotypes or worn out received wisdom about where people find love, desire, trust, affinity, and meaning.  As the writer Sarah Schulman says, I want to understand how people experience their own lives, rather than imposing outside narratives upon them about what they should want or how they should want to live.

FFITCH: I am working on a novel about encroaching neofascism in a small rural community, and the ways in which the community, including three generations of one uncontainable family, attempt to respond, or become complicit. It’s a story inspired by the grassroots antifascism resistance in Appalachia that I began to be more aware of and appreciate after the powerful mobilizations against the Unite the Right Rally in Charlottesville, VA and the white supremacist rally in Pikeville, KY later that year. Like much of my work, it’s also about unconventional ways of making family and home by working with what you have, however flawed it might be.

About the author: Madeline ffitch cofounded Missoula Oblongata, a punk theater company, and participates in Appalachia Resist!, a direct-action collective. Some of the publications where her works have appeared include Tin House, Guernica and Electric Literature. Her first book, a collection of stories, was Valparaiso, Round the Horn. Stay and Fight is her first novel.

The Future is Now with a Twist

Ohlsson Follows Her Heart in Writing The Chosen