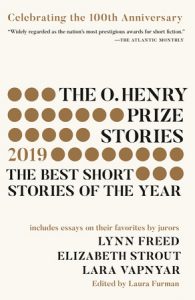 This year’s stories were chosen from the thousands published in magazines over the previous year. The winning writers are an impressive mix of celebrated names and new, emerging voices. Their stories evoke lives both near and distant, in settings ranging from Jamaica, Houston, and Hawaii to a Turkish coal mine and a drought-ridden Northwestern farm, and feature an engaging array of characters, including Laotian refugees, a Columbian kidnap victim, an eccentric Irish schoolteacher, a woman haunted by a house that cleans itself, and a strangely long-lived rabbit.

The uniformly breathtaking stories are accompanied by essays from the eminent jurors on their favorites, observations from the winning writers on what inspired them, and an extensive resource list of magazines. Some of these writers also have film/TV credits which Authorlink has added below.

AUTHORLINK NOTES: RELATED FILM/TV CREDITS by some of these authors. Our source was IMDB.com. We welcome any comments or corrections.

is best known for her 2011 TV series, SCARY TALES. Historians comment on the horrific original versions of your favorite tales. The series starred  Judy Geeson, Paul B. Thompson, Maria Tatar .

Valerie O’Riordan was assistant editor for several TV series, including TO BUY OR NOT TO BUY, THE SKY AT NIGHT AND DON’T DIE YOUNG. She has also served as an editor on four TV documentaries.  Valerie produced a short family drama titled WITH CHILDREN in 2017.

Weike Wang has a comedy, romance film in development titled CHEMISTRY as writer (novel). Ming Peiffer is writing the screenplay. Michah Fitzerman-Blue, a producer, is known for the film, TRANSPARENT (2014) and producer Noah Harpster for A BEAUTIFUL DAY IN THE NEIGHBORHOOD. The film is a luminous coming-of-age novel about a young female scientist who must recalibrate her life when her academic career goes off track.

ander MacLeod has appeared as an actor in the TV crime documentary, A CRIME TO REMEMBER in 2014. He will appear in a short businessman film, KAMIKO, now in production.

Getting at the Truth: A Conversation With M. William Phelps