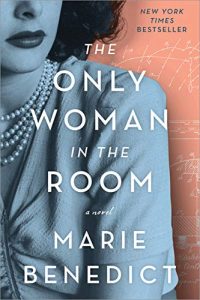 The Only Woman in the Room: A Novel (Sourcebooks Landmark, 8 January 2019)

It is remarkable how many advances in science and technology made by women, are left out of history. One of the biggest stars in Hollywood in the 30s, 40s, and 50s was Jewish-born Viennese, Hedy Lamarr. Louis B. Mayer promoted her as ‘the world’s most beautiful woman’ and, cinema-goers gasped when she first appeared on the screen. However, no one knew that she fled the Nazis and her pro-fascist arms-dealer husband who used to confer with scientists about military technology and entertain Mussolini and Hitler at their home.

Reportedly, the lack of stimulation Lamarr felt in acting, caused her to take up inventing. She wanted to create a secret, failproof, radio-guided torpedo system to help the Allies out of guilt for her past and devised a secret communications system (Spread Spectrum Technology) which is the foundation for Wifi today.

The Only Woman in the Room is a fictional account of the history of Hedy Lamarr, her life, her career and her genius. New York Times and USA Today bestselling author, Marie Benedict, writes a beautiful, sweeping novel that entered the New York Times hardcover fiction list at Number 11.

AUTHORLINK: Ms. Benedict, it’s so good to have you on Authorlink. Welcome! We love Hedy Lamarr movies and are grateful to see your book celebrating her life in your historical fiction novel, The Only Woman in the Room. While there is an abundance of information about Hedy being a Hollywood actress, there is much less information about the fact she was also a brilliant scientist and inventor. She was Jewish, grew up in Austria and married the country’s richest man; a munitions manufacturer who ended up supplying weaponry to Mussolini and Hitler. When she fled to Hollywood and became famous, she kept her origins secret (her children didn’t know her background) and even had to learn how to speak English without an accent. Hedy then invented (with composer, George Antheil) a “frequency-hopping” radio communication technology that distantly prefigured Wi-Fi and helped defeat the Axis powers in World War II. What an extraordinary life. Would you like to share with us when you first were inspired to write about Hedy; how long it took to write your story and the developments along the way?

“…my route to telling Hedy Lamarr’s story was a circuitous one.”

BENEDICT: First of all, thank you so much for inviting me here today to talk about my books!  You’ve beautifully summarized my most recent novel, THE ONLY WOMAN IN THE ROOM, and to answer your question, my route to telling Hedy Lamarr’s story was a circuitous one. It took me a decade as a commercial litigator in New York City and several years publishing historically-focused books in different genres to realize that I was truly called to write fiction focused on unearthing stories of important historical women who were otherwise unknown. As I’ve journeyed down this path, I feel like I’ve developed an antenna for these women, and I find them everywhere! They are literally hidden in plain sight. In this particular case, a lovely anthropologist friend mentioned a Golden Age of Hollywood actress who was also an inventor, and I placed that woman — Hedy Lamarr — on my long, long list of astonishing historical figures about whom I’d like to write. When I learned that the invention she made during World War II became the foundation for the world-changing innovation we know as wi-fi, I knew hers was the tale I needed to tell next.

AUTHORLINK: That’s brilliant. You love to explore untold stories – especially about women who struggled in the past with the issues women still struggle with today. For instance, your first historical fiction, The Other Einstein, was about Albert Einstein’s wife, Mitza Maric, a brilliant physicist in her own right. Your second historical fiction was Carnegie’s Maid about Clara Kelly, a lady’s maid in the home of the prominent businessman Andrew Carnegie, whose influence over him may have spurred his transformation from ruthless industrialist into the world’s first true philanthropist. Why is it integral for these stories to be told, do you think?

BENEDICT: I believe these stories serve several purposes. First, I think we owe it to these women to acknowledge their contributions; they’ve spent too long hidden in the shadows. And while we are doing so — bringing the historical women into the light of modern day — we are also shining a pathway for girls and young women who are beginning their own life’s work, offering them examples to follow about which they might otherwise be unaware. Finally, I’ve seen that people can engage and connect with the difficult, sometimes controversial issues I raise in my books in a way they might not if those topics were raised in a non-fiction format; something about reading about those issues in the context of an intimate, fictional story about a very real historical figure makes those topics come to life.

AUTHORLINK: These are all important and valid points. You have also written other books with your pseudonym, Heather Terrell, and published the historical novels The Chrysalis, The Map Thief, (with the same heroine, a Mara Coyne, a New York lawyer) and Brigid of Kildare. You once said, “My earlier novels, the ones I wrote under the name Heather Terrell, all contained at their core a mystery, typically one that focused on an unanswered historical question or myth.” While those novels differed in genre, they shared that similarity to your current, historical fiction novels.

Can you tell us a bit about how this happened and how you moved into a different genre? We wonder whether it was necessary for you to change your name so that you can be marketed from a fresh point of view? Did you have a different agent/publishing company writing under the name Heather Terrell or are they the same today?

“—I learned that I really enjoyed a deeper dive into my characters’ emotions, using the first person.”

AUTHORLINK: Can you tell us about your road to being a writer? We understand your interest in telling stories of women overlooked in history was ignited by a Christmas gift from a favorite aunt, THE MISTS OF AVALON by Marion Zimmer Bradley (a favourite) – a groundbreaking book that gives the women of the Arthurian legend voices. What was the very first book you started to write? How long did it take to finish? Who was your first reader, and did you find an agent straight away?

BENEDICT: As I mentioned above, my road to becoming a writer was long and circuitous. The seed to writing historical fiction was planted when I was in middle school, by that aforementioned aunt, an English professor and poet, with her gift of THE MISTS OF AVALON. I pursued the passion for unknown voices and stories in history and became a history major in college, but got detoured along the way by societal “suggestions” that history majors would make excellent lawyers. Even though there were aspects of the law I enjoyed, during my decade as a commercial litigator, I knew it wasn’t the work I was meant to do, and I began to form an idea for a book, centered on history, art, and not surprisingly, the law. It took me eight years to write it (my lawyering days were incredibly long), but after I showed that book — which became my first novel, THE CHRYSALIS —  to my now-agent (one of my first readers), I began the journey that I’m on today.

AUTHORLINK: How long does it take for you to research your books and then how long does it take to write a novel, and later, to edit it to a state of readiness for your first reader? Do you leave your first draft in the drawer and then come back to it after a month with a fresh pair of eyes before re-editing? When do you send it off to your agent? And how long do they work on it, before they send it off to your editor at your publisher’s?

“— I dedicate ten to twelve months exclusively on each novel, including research and writing.”

BENEDICT: While each project is slightly different, I would say — on average — I dedicate ten to twelve months exclusively on each novel, including research and writing. That time estimate does not include the hours and days I spend on each potential idea over a period of years, contemplating the woman and their era, musing on their work, and dabbling in the first stages of research. Once I’ve committed to a particular project and I write my first good draft, I am fortunate that my wonderful agent does read and pre-edit my work before we send it to my editor, but the manner in which we do so varies from book to book.

AUTHORLINK: That is so interesting, thank you. Do you bother with hyper-critical reviews or only focus on the ones that offer balanced, respectful constructive criticism? Or do you not look at criticism at all?

BENEDICT: Although I do not linger on hyper-critical reviews, I do consider the overall feedback that my novels receive, and try to remain open to people’s reactions.

AUTHORLINK: We understand you’re currently working on a novel about Clementine Churchill. While Winston is often hailed as one of the great leaders of our time, little is known about his wife. Can you tell us a bit more about it?

BENEDICT: Clementine Churchill was a brilliant woman whose unsung influence truly helped shape two World Wars, as she stood beside — not behind — her famous husband Winston during the key events of the modern era. Theirs was a singular partnership of both the heart and mind, and Celementine was a partner who did not flinch through the sweeping darkness of war and who would not surrender to expectations or enemies. Her impact and reach was such that Winston’s chief of staff once said that he did not think the outcome of World War II would have been the same without her.

AUTHORLINK: That sounds brilliant. And finally, a few questions just for fun…who are your heroes in real life? With which historical figure do you most identify?

BENEDICT: What challenging questions! There are countless historical women and heroic modern-day women with whom I identify. I don’t think I could select only one; it would be like choosing one of my children as my favorite!

AUTHORLINK: Yes, understandable. Ms Benedict, thank you so much for sharing your time today and talking about The Only Woman in the Room. We wish you the very best for your continued success!

BENEDICT: It is an honor and a privilege to tell these historical women’s stories and accomplishments, and so, I’m especially thankful for your interest in talking with me today and in sharing your thoughts about my work.

While practicing as a lawyer, Marie dreamed of a fantastical job unearthing the hidden historical stories of women and finally found it when she tried her hand at writing. She embarked on a new, narratively connected series of historical novels starting with The Other Einstein, which tells the tale of Albert Einstein’s first wife, a physicist herself, and the role she might have played in his theories. Her latest novel, The Only Woman in the Room, is about the life of Hedy Lamarr.

Lisa See’s Dreams of Joy, A Captivating Tale of Chinese-American Love and Passion 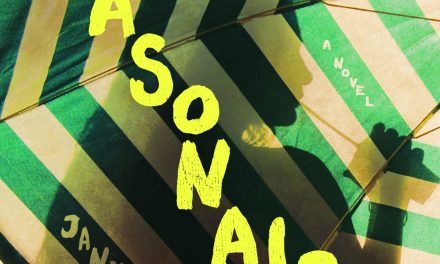