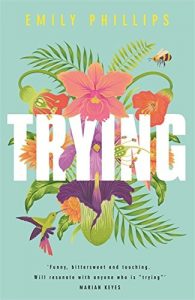 Olivia and Felix want to have a baby. Most of Olivia’s friends and co-workers are somewhere on the same continuum – trying, pregnant, babe in hand. Olivia wonders if it will ever be her turn. Even being together with Felix on fertility days isn’t easy. Both have challenging, stressful jobs. Felix’s work takes him out of town a lot. Olivia is consumed with coming up with the best marketing for the Hygge experience. Enter her aggressively attractive Danish boss, Mads, and her life spins more out of control than she could ever have imagined.

AUTHORLINK: Having experienced some of that Trying in my own life, I have to ask if your knowledge of this subject is based on personal experience?

“…the expectations you have for yourself, are very pressurizing…”

PHILLIPS: I think it’s fair to say that Trying would have never come to pass had I not been struggling with my own fertility. I was sitting chatting to friends about the awkward, draining, but ultimately blackly comic trials and tribulations of trying for a baby and how no one had written a novel about it – and they agreed that they thought it would be funny, but also relatable read. It’s an odd time in your life: the expectation that society has for you as a woman in her thirties, as well as the expectations you have for yourself, are very pressurizing and that makes for a strong emotional drive of a novel.

AUTHORLINK: In the story, Olivia interviews mothers who had fertility problems. Did you interview women who were/had been trying?

PHILLIPS: My background is as a women’s lifestyle journalist, so I felt it was my duty of care to research other approaches to creating a family and the problems that throw up to balance out this one perspective of trying to conceive. So, I spoke to friends about their experiences and fictionalized elements so that they were concealed but their experiences remained intact.

AUTHORLINK: You have many distinct characters in your book. Tell me a little about how you developed them?

PHILLIPS: I felt very strongly that this shouldn’t just be a book about trying for a baby, but trying to just keep up with all of the challenges of being a ‘grown up’ in your thirties. We have Olivia, our protagonist, who has shaped this career slightly left of her creative skillset but is still pushing for equal pay with her male counterparts. She doesn’t quite feel ready for being a baby making machine but is stuck in the treadmill of trying alongside a best friend who she has increasingly different takes on the world to. We have Felix, the husband who doesn’t know who to turn to in order to express the depths of his despair at not becoming a father, and watching his relationship crumble because of it. And we have Mads who seems to have everything Felix doesn’t for Olivia. I felt it was important to move these characters away from our real lives and give them fresh challenges which didn’t exist for me to give it a heightened sense of drama – but also so that Liv could sometimes be a complete bitch.

AUTHORLINK: Where did your idea to use Hygge come from?

PHILLIPS: The Scandinavian lifestyle trend of hygge was very much the forefront of everyone’s minds as I was writing the book, and I couldn’t help but feel that the concept was so ultimately smug that it was the perfect microcosm of how parenthood looks from the outside: cozy, beautiful and elusive.

AUTHORLINK: How much of a plan did you have as you started writing and how much did the characters decide their own fate as you wrote.

“When I pitched the book, I had a two-page synopsis, one chapter, and some character bios.”

PHILLIPS: When I pitched the book, I had a two-page synopsis, one chapter, and some character bios. It was pretty scanty and the chapter I’d written was very unlike how the book ended up. Thankfully the characters took root in my head and grew of their own accord. By the end of the writing process, they were conversing with me in my head.

AUTHORLINK: This is the second novel that I’ve read this winter that incorporates social media into the text of the story. Do you see that as something that is likely to be rather typical in contemporary novels?

PHILLIPS: I found it hard to not utilize social media posts within a story like this, because there was something so delicious about what you actually say to people in messages, how you act to them in person and how you actually feel about them in your head.

AUTHORLINK: Did you write any earlier novels that haven’t been published? How did all of your earlier writing help you gain the skills you needed to write a highly acclaimed novel?

PHILLIPS: This is my first novel, although I had been noodling around with a magic realism historical novel for a long time prior that will probably never see the light of day.

PHILLIPS: I’ve just started work on a second comedy, this time focused on female friendship. And I had that baby I always wanted, so she’s taking up most of my time!

About the Author: Emily Phillips has now achieved her two main goals in life – to write a book and have a baby. She is also a high-achieving Features Director for Grazia where she has interviewed the likes of Amy Poehler, Jane Birkin and Jamie Dornan. She has written about egg donation and over-committing, and helped close the pay gap between men and women. She lives with her family in London. 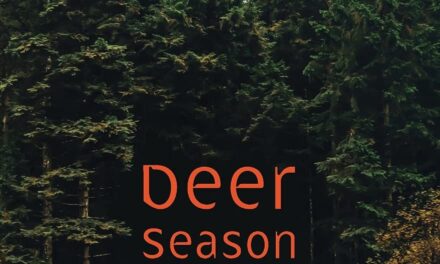