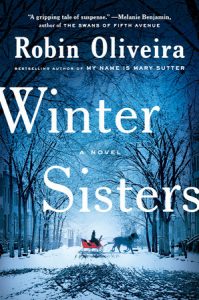 Robin Oliveria’s haunting thriller, “Winter Sisters,” loosely based on a 19th-century historic snowstorm that buried Albany, New York, also shines light on early 20th-Century age-of-consent and sexual-assault laws. The storyline focuses on ten-year-old Emma and seven-year-old Claire O’Donnell, who seemingly vanished in the blizzard.
Tragedy quickly develops when the girls’ parents perish as they struggle through the snowstorm to rescue their daughters. So when the parents fail to retrieve them after the storm subsides, Emma and Claire strike off on foot for home in knee-deep snow, and then, disappear.
The scene shifts to Dr. Mary Stipp and her family, the O’Donnell’s close friends, who refuse to give up hope of finding the girls, even after the police end the search, saying they had obviously fallen into the Hudson River.
Six weeks later, when the ice breaks and floods “the Pastures” near the river, we learn that the girls have instead escaped a captor. They are found by a police officer who recognizes them and takes them to the Stipp’s home where they are sheltered. Upon examination, Dr. Stipp determines Emma has the wounds of a child whose has been sexually assaulted. Claire is likewise traumatized, but otherwise unharmed physically.
Although the girls say their male captor was not the mysterious “other man” who allegedly harmed Emma, law enforcement nevertheless aggressively pursue kidnapping and rape charges against him. At trial, his defense attorney implies Emma couldn’t be raped, because age ten was then the age of consent.
Pressure against Dr. Stipp mounts. Falsehoods are filed, and the doctor is stripped of hospital privileges, as she comes closer to learning about “the other man.” For Dr. Stipp, the girls’ captivity and her subsequent experiences demonstrate what “evils humans are capable.”
As Oliveria notes in an interview, although age of consent has changed in New York, the “heinous way” sexual assault victims are treated, and their attackers prosecuted, continues today.
History and social concerns with a tilt toward women’s equality are skillfully woven into Olivera’s dramatic family saga with intense characters, producing a gripping rollercoaster ride likely to rivet readers.
https://www.penguinrandomhouse.com/books/538709/winter-sisters-by-robin-oliveira/9780399564253/

The Author’s Toolkit by Mary Embree