The Killer Collective by Barry Eisler 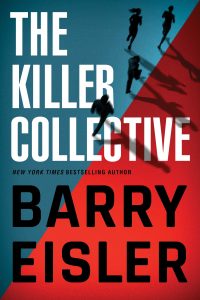 Seattle Detective Livia Lone’s progress on a joint police/FBI investigation into an international child pornography ring takes an unexpected twist when she stumbles upon a link to the US government. The sudden cancellation of the investigation followed by an assassination attempt tells Livia that powerful people are aware of the danger she poses to them, and they are prepared to try to stop her at any cost. Livia’s personal history and professional ethics means she can’t allow the perverts to escape justice. She sets out to identify them—but who can she trust?

Livia contacts old friend and would-be lover, former Marine sniper Dox, and with his help they assemble a team of highly-experienced black ops professionals—John Rain, Dan Larison, and former Colonel Scott Horton. A violent incident in backwoods Virginia points to the OGE mercenary corporation headed by Oliver Graham. OGE has links to governments across the world, but who is Graham protecting? Livia’s fractious team must go to France and seek a rapprochement with John’s former lover, ex-Mossad agent Delilah, if they’re to get near Graham and identify those behind the pedophile ring. The stakes are as high as they’ve ever been for Livia as she and her team head into a bloody encounter on the streets of Paris and the truth of the affair.

Eisler’s The Killer Collective packs a punch like a sniper’s rifle. A solid grounding in up-to-the-minute technology and current affairs makes this a hot read for thriller lovers.

The Moses Expedition by Juan Gomez-Jurado