The Keeper by Jessica Moor 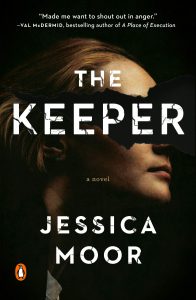 Jessica Moor’s novel, “The Keeper,” needs to be read, despite its painful subject: Why do women stay with their abusive husbands/partners? Moor tackles the physiological and physical fear of women caught in the cycle of violence, and why law enforcement shies away from domestic abuse.

The protagonist, Katie Straw, dies in a posh English tourist town. The police quickly conclude she jumped from a bridge into the Widringham River and declare her death a suicide, calling it a case of “middle class disappointment.” But the director of the women’s shelter where Straw was working raises enough suspicion about Straw’s death that it forces police to initiate an investigation.

Through flashbacks and stories from women in the shelter, Moor develops a narrative of compassion. Although the women are socially and economically different, they share one thing in common: They have all fled abusive situations and are afraid to be found, and then murdered.

Almost daily the women are in a quandary and often question if they better off returning home or waiting to be found. One resident, after her husband pleads, cries and says he loves her, returns home. The refuge director explains “control can feel like love,” and women are often taught there is “no difference between control and love.” Another resident fears she will lose custody of her children because courts often side with men in domestic violence cases.

… a heartfelt tale with a strange, unsuspecting and haunting ending.

Straw had met her partner, Jamie in a bar. He seemed nice, they dated, and eventually he moved in with her. At the outset, she enjoys his attentiveness. But he proceeds to tell her how to dress, cuts her off from friends, forces her to quit her job, and the physical abuse begins. When he doesn’t want her any longer, he attempts to kill her. A hospital nurse recognizes domestic violence and helps Straw find a shelter.

This uncomfortable novel is also a detective story about male police officers who choose to ignore real threats against women. When another woman in the shelter disappears, Detective Dan Whitworth “wondered, with an ancient sort of weariness, can these bloody women not look after themselves?” It’s definitely a heartfelt tale with a strange, unsuspecting and haunting ending.

Loving Learning: How Progressive Education Can Save America’s Schools

How to Build A House by Dana Reinhardt