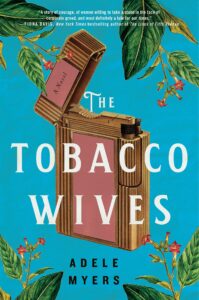 Fifteen year old Maddie Sykes is taken by her war-widow mother to the town of Bright Leaf, NC, where she’s thrust into the care of her Aunt Etta. Etta is the go-to seamstress for the town’s society women—the Tobacco Wives. As Maddie is a talented seamstress in her own right they resolve to make the best of the situation. The height of the summer social season is coming up and Etta could use a hand. When circumstances shift unexpectedly Maddie has to take on the challenge of dressmaking for Etta’s clients.

… semi-autobiographical The Tobacco Wives is a first novel and a tour-de-force.

Tobacco is everything to Bright Leaf. The women work in the cigarette factories, keeping them going while the men slowly return from the war. Yet Maddie soon realizes that all women, even the classy Tobacco Wives, are considered second class citizens by the wealthy men who run the town. Unknown to those men, the women are beginning to fight back. There’s also a lot of unexplained sickness which especially affects pregnant mothers and their babies. When Maddie stumbles across the cause of the sickness she finds herself on the horns of a dilemma. Big Tobacco is pervasive and powerful. Who should Maddie speak to? Who can she trust? If she speaks out, it would end the town’s prosperity and hurt those she’s come to befriend and even love. If Maddie stays silent, many people will die…

The semi-autobiographical The Tobacco Wives is a first novel and a tour-de-force. Myers evokes the postwar world with deftly-drawn believable characters, and a real-life situation that highlights women’s activism and the toxic lies of a major industry.

The One Minute Millionaire by Mark Victor Hansen and Robert G. Allen

Looking for Mr. Nobody by Sue Rann

The Woman in the Fifth by Douglas Kennedy