Review: The Making of Her by Bernadette Jiwa 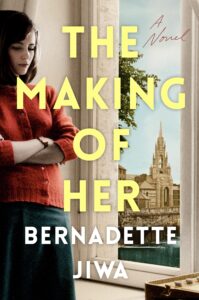 The Making of Her

Dublin, 1996: Joan Egan lives a wealthy but increasingly frustrating life in a posh suburb. Her husband Martin is subservient to his mother, Molly, who never ceases to remind Joan that he married beneath himself. The Egans own a prosperous builders’ supply business: Joan was born into a poor family in the wrong part of town. Nothing she does is ever right with Molly. Joan can’t even bring herself to engage with her daughter Carmel out of guilt, because Carmel is not Joan and Martin’s only child. They had another daughter, born out of wedlock in England and yielded up for adoption, for as Martin always insists he has the Egan’s good name to consider.

… a poignant, engaging and, above all, hopeful story …

One day the moment Joan dreads and longs for arrives in the form of a letter from her lost daughter. Emma wants to meet. Martin reneges on an earlier promise and refuses to have anything to do with her. Disgusted by his weakness, Joan follows her own mind. Emma confesses she has a request to make, and it’s the only reason she reached out to the parents whom she believes abandoned her. Emma’s son Ben is ill. With Joan’s troubled marriage driving onto the rocks, she faces a mess of shame and recrimination. Can Joan defy her culture, reconcile with both her daughters, and find peace and true happiness, or will she gamble and lose everything?

The Making of Her is a poignant, engaging and, above all, hopeful story of what it truly means to be a mother. Jiwa’s characters shine from the page, and her evocation of the narrow-minded world of Ireland in the sixties and nineties is spot-on.

A Twisted Vengeance by Candace Robb

The Dog Who Spoke With Gods by Diane Jessup