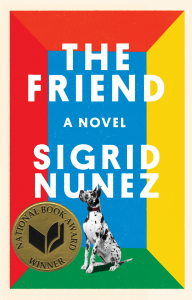 The Friend,” a novel about grief, books and a dog named Apollo, has won the National Book Award for fiction. The awards ceremony was held November 14 at Cipriani Wall Street in New York City.

Nunez’s book portrays a woman mourning the death of her literary mentor and of her bond with the dog he left behind. It is a story, in part, of connection and distance.

Nunez published her first book in 1995 and had been steadily writing for more than two decades before receiving her first nomination last month for a National Book Award, the most prestigious American literary award. Her triumphant moment came on November 14 as she won the coveted prize for Fiction. Nunez is the author of such previous novels as “Salvation City” and “The Last of Her Kind.”

In her acceptance speech, she said that she didn’t seek community when she became a writer, but unexpectedly found it.

“I thought it was something I could do alone and hidden, in the privacy of my own room,” she said. “How lucky to have discovered that writing books made the miraculous possible, to be removed from the world and be part of the world at the same time.

“And tonight how happy I am to feel a part of the world.”

Nunez’s novel was chosen from among five fiction works.

Nunez has received several awards including a Whiting Award, the Rome Prize in Literature, and a Berlin Prize Fellowship. She lives in New York City.

Other 2018 National Book Award winners include Jeffrey C. Stewart, author of The New Negro: The Life of Alain Locke (Nonfiction); Justin Phillip Reed, author of Indecency (Poetry); and Toko Tawada and her translator Margaret Mitsutani, inaugural Translated Literature winners for The Emissary. Finally, in a major moment for slam-poet-turned-YA-author Elizabeth Acevedo, her innovative debut The Poet X nabbed the trophy for Young People’s Literature (EW called it “a stunning amplification of the Latina experience).

Borders Beefs Up Book Clubs In Store and Online