Review: The House at the End of the World by Dean Koontz 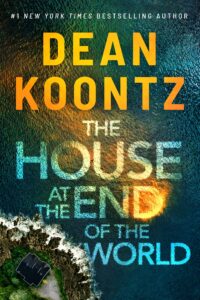 The House at the End of the World

Katie suffered the deepest tragedy anyone could imagine when her family was gunned down in an ice cream store by a trio of gang members. Her Marine veteran husband later died attempting to expose the killers, one of whom was the son of a rising US senator with presidential ambitions. Faced with the senator’s behind the scenes power and implied death threats, Katie had little choice but to stop fighting for justice and to accept instead the pay-off to keep quiet. She bought the Great Lakes island of Jacob’s Ladder and retired from humanity. With nothing but the local wildlife and her art for company, Katie imagined she’d be safe from the world for years.

… sympathetic characters and the master’s deft touch at building fear on every page.

Katie is aware that the neighboring island of Ringrock houses a government research facility, but she doesn’t believe the official line that it’s an EPA establishment. The security is intense, yet in spite of it all disaster strikes Ringrock. Something that could threaten all life on Earth has gotten loose, and two arrogant federal agents arrive on her island in pursuit. The world crashes in on Katie’s refuge. Besieged in the cottage she believed safe against anything, Katie is startled when a girl, Libby, appears out of the stormy night bearing more knowledge than she should about Ringrock and the entity that escaped. With the government set to try to cauterize the entire disaster and pretend it didn’t happen, Katie and Libby must find a way to escape.

Koontz sets a high standard by which all authors of suspense must be judged. The House at the End of the World is a real read-with-the-lights-on page-turner with sympathetic characters and the master’s deft touch at building fear on every page. A must-read for suspense lovers.

Her Every Fear by Peter Swanson