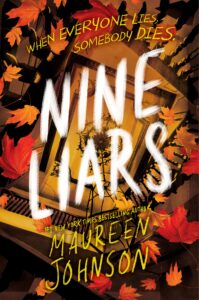 Stevie Bell’s suffering in her senior year at Ellingham Academy. Mysteries and murders are woefully thin on the ground. Boyfriend David is studying in London. Her friends Janelle and Vi are slammed applying for colleges, and Nate is busy in a world of his own. Stevie’s coursework is as interesting as watching paint dry, so when David wrangles an invitation for the gang to study in London for two weeks they leap at the chance. Winning grudging approval from Dr. Quinn, the formidable Head of School, they fly to England and plunge straight into a mystery.

…an English country house murder-mystery in the classic tradition.

David’s English friend Izzy is concerned for her Aunt Angela. Angela lets slip an allusion to a double murder she got mixed up in when she left Cambridge University. Back in the 90s, Angela was one of The Nine, a group of students wrapped up in theater and each others’ lives. During a celebratory weekend at a stately home, Merryweather, two of The Nine were brutally murdered. The killer was never found. When Angela disappears, Stevie and the gang are compelled to investigate. Did Angela remember something crucial to the murder, something that has placed her in grave danger? Gathering the other surviving members of The Nine at Merryweather, Stevie battles crippling anxiety attacks and doubts about David’s fidelity as the pursuit of justice turns deadly.

Maureen Johnson’s Nine Liars is an English country house murder-mystery in the classic tradition. Stevie Bell’s a great fully-formed character with foibles and flaws, and the whole story is threaded with delicious humor.

The Girl From Home by Adam Mitzner

Music for Wartime by Rebecca Makkai