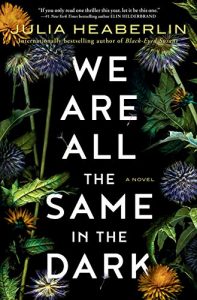 We Are All The Same In The Dark

Trumanell Branson was a Texas town’s homecoming queen, a beyond-beautiful local heroine who overcame a deeply troubled home life to win the respect of her neighbors. When Trumanell disappeared the respect turned into outright adoration, and a virtual cult sprang up around her name. Was she murdered by her abusive father who disappeared that same night? Did she fall victim to her kid brother Wyatt, who was found raving insane some miles away? An extensive search failed to find any trace of the Bransons, and a legend was born.

Ten years on, Wyatt discovers a one-eyed girl lying in a field alongside the highway and calls his former girlfriend Odette Tucker, a third-generation town cop. Odette lost her left leg in a car accident the night her best friend Trumanell disappeared, so from the first she feels a kinship with the one-eyed girl. Wyatt has a difficult relationship with the townsfolk, who hate and fear him. Odette takes the one-eyed girl she names Angel into her own care and tries to discover more about Trumanell’s disappearance. Odette feels she’s getting close to the murderer, but fate decrees otherwise.

. . . an anthem to those who overcome physical difficulties

Five years on, Angel takes up the baton, compelled to finish what Odette began. Can she negotiate the minefield of lies and speculation sown around the Trumanell legend and find the truth without sharing her fate?

We Are All The Same In The Dark is an anthem to those who overcome physical difficulties and a murder-mystery with all the slow building tension of a burning fuse snaking through the Texas dust. Heaberlin never puts a foot wrong with her characters all the way to the twist at the end.

The Purple Swamp Hen and Other Stories by Penelope Lively

Honor Bound: Inside the Guantanamo Trials by Kyndra Miller Rotunda