Review: The Blunder by Mutt-Lon 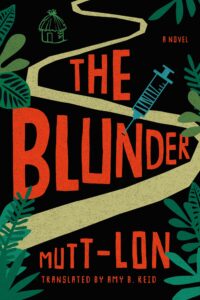 Translated by Amy B. Reid

From Mutt-Lon comes a unique and educational African novel based on an actual event, translated into English. His work, “The Blunder,” unfolds in 1929 in the Central African country of Cameroon, when 700 villagers are inflicted with blindness caused by unauthorized vaccine meant to prevent sleeping sickness.

Dr. Eugéne Jamot, who heads the French sleeping-sickness mission in the country, discovers one of his doctors has altered his vaccine-injection protocol. The doctor, he learns, has been injecting many villagers with an increased dosage of tryparasamide which contains arsenic.

… a period in time worth recalling because it shows how malpractice and good intentions — coupled with colonialism — goes tragically awry.

When Damienne Bourdin, a new doctor, arrives in Cameroon, she is assigned a difficult mission. Dr. Jamot tells her about the injection change and his fears of a rebellious uprising against the doctors and staff. “When the villagers realize the blindness resulted from “those big needles the white men living among them shoved into their skin days after day,” he says, “it will be a time bomb.” His fears are realized when villagers attack the Bafia medical clinic. Some workers escape while others take refuge in an administrative residence.

Bourdin is tasked within seven days to rescue Débroa Edoa, a Cameroonian princess and a nurse who was working at the clinic and is reported missing. Edoa is the niece of Chief Charles Atangana who could prevent a major revolt. But if Edoa is not returned unharmed, Atangana would be in no mood to assist in negotiations.

As Bourdin travels through the jungle with Ndongo, her Pygmy guide, she experiences several harrowing experiences including capture by a village chief. When in Bafia she discovers her mission has become much more complicated. Edoa is missing, and perhaps being held captive because she aided the doctors in administering the injections.

Mutt-Lon delves deeply into the colonization of the region. During this period this area was administered by France but governed by the League of Nations. As Mutt-Lon notes, the health centers were part of an effort by the French to assert colonial control over the region.

Mutt-Lon (pseudonym of author Nsegbe Daniel Alain) apologizes for using language that defines the racism and prejudices of the time, but he need not. Rather, he successfully has depicted a period in time worth recalling because it shows how malpractice and good intentions — coupled with colonialism — goes tragically awry.

Outrageous Forturne: Growing Up at Leeds Castle by Anthony Russell