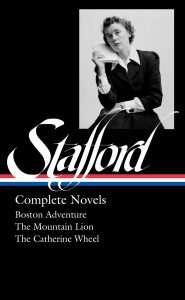 Pulitzer-Prize-winner Jean Stafford gets renewed attention from The Library of America with three of her most important works in one edition. Boston Adventure is a dense work written in 1944 that garnered her national acclaim for her masterful prose and genuine characters. Also included in the volume, edited by Kathryn Davis, is The Mountain Lion and The Catharine Wheel.

Boston Adventure is a protracted two-book novel centering on the complex psychological perspective of a young girl, Sonia Marburg, daughter of immigrants whose dream for American’s wealth would not materialize. She matures in a turbulent and insane home environment, and dreams of one day living in Boston.

In a dramatic scene Stafford skillfully depicts the tragedy of mental illness. Her father abandoned them while Sonia’s mother was pregnant. The mother hates her newborn son and ultimately finds a way to guide him to his death.

In the second book, Sonia’s mother is confined to a mental institution while Sonia departs to live and work with Mrs. Pride, a wealthy woman and often a summer guest at the hotel where both Sonia and her mother cleaned rooms.

Sonia is encouraged to participate in Mrs. Pride’s many social engagements where she witnesses a racist and pompous upperclass. Sonia must decide if she wants to continue to be pawn for Mrs. Pride, or follow her childhood sweetheart to Europe.

The Mountain Lion is a mournful story of two siblings, both outcasts among friends. Ralph and Molly Fawcett experience great joy when their grandfather, who owned a ranch in Colorado, visits them in California. The grandfather regales them with stories, notably one about his memorable sighting of a mountain lion.

After the grandfather’s death, Ralph and Molly began to spend summers at his ranch, now owned by their Uncle Claude. Unexpectedly, Ralph and Molly see the mountain lion. Both Ralph and Claude want to kill the cat. Ralph says he wants her to stuff her “… because he loved her, but Uncle Claude wanted her only because she was something rare.” Ralph lamented, “Oh, if I don’t get her, I will die!”

The third novel, The Catherine Wheel, is again about juveniles and relationships. Twelve-year-old Andrew Shipley plots revenge against his father who abandoned him, with tragic results.

… also offers historical perspective of Americans during the last mid-century: racism, economic disparity, the self-absorbed attitudes of the wealthy, and, most striking, treatment of those with mental illness …

As always, the Library of America’s bonus is the author’s chronology, which in this case gives us a deeper understanding of how Stafford’s stories emerged, and how she fought her own demons. Stafford’s talent is her vivid and detailed observation of the environment while incorporating personal conflicts, all of which makes her writing deep, and lengthy.

But this collection also offers historical perspective of Americans during the last mid-century: racism, economic disparity, the self-absorbed attitudes of the wealthy, and, most striking, treatment of those with mental illness, like Stafford herself, who endured depression and was an alcoholic.

Past Tense by Bob Levy

A Person of Interest by Susan Choi