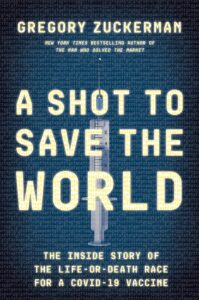 A Shot to Save The World

Nowadays, Pfizer’s Executive Director, Greek-born Albert Bourla flies in his own private jet, and when he enters a room, people applaud, according to Financial Times. But what’s missing are accolades for the scientists who developed the Covid-19 vaccine, where ground level research met the human search for money.

Gregory Zuckerman’s book, “A Shot to Save the World,” offers homage to those scientists while also stressing that the vaccine competition was won by those who could generate the most capital. They include not only Bourla, but also Stéphane Blancel, a master fundraiser for Moderna. Blancel, said to have “no moral compass,” is profiled as a tyrant who insulted scientists and pushed them almost to the breaking point. Two scientists —Uğur Şahin, a Turkish immigrant, whose parents found asylum in Germany, and his wife, Özlem Türeci, also from Turkey and living in Germany — set aside their cancer research when they recognized the coming pandemic. The couple were convinced a “mRNA vaccine directing the body to produce the coronavirus spike’s protein” would be the most effective in fighting Covid-19. But they needed financial support, and that’s when the German company, BioNTech, teamed with American-owned Pfizer to achieve mass production.

… offers homage to those scientists while also stressing that the vaccine competition was won by those who could generate the most capital.

Moderna might have developed the vaccine first had they not accepted federal assistance which required additional testing. Instead, Pfizer opted out of federal money and didn’t have to conduct those tests, and by doing so won the vaccine race.

Moderna also used the mRNA as the carrier, a concept tested and studied for decades by Hungarian-born biochemist Katalin Karikó who advocated its potential as a vaccine. She researched at the University of Pennsylvania, where she was derided as an “alien,” even mocked by colleagues as she walked down the hall: “There goes that crazy mRNA woman.” She was paid a paltry $40,000 annual salary without tenure, and demoted because she had difficulty securing grants. Amazingly, Penn Medicine recently bought a full-page magazine ad with her picture, boasting her research was the foundation for the vaccine.

Zuckerman’s book is like a mystery thriller filled with sensational characters, scientists, at the mercy of the stock market. It’s an insightful read which can raise your hackles on how human health priorities are dependent on the ability of some to gain wealth. Thankfully, the book highlights committed scientists, many of them immigrants, underlining the need to consider public health a global issue.

Secrets of a Former Fat Girl by Lisa Delaney

Girl to the Core by Stacey Goldblatt