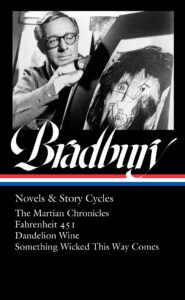 The Library of America 2021

Four of Ray Bradbury’s literary works from the 1950s and 1960s, including the prescient Fahrenheit 451, are now available in a single volume issued by The Library of America.

… a must-read for these times, offering insight into our current lives, …

Bradbury, who at an early age was a voracious reader and prolific writer, is perhaps best known for Fahrenheit 451, in which we find an astonishingly accurate description of the present.

Protagonist Guy Montag, a fireman, whose job is not to extinguish blazes but to torch books (the title refers to the ignition point), because people have been forbidden to own or read them. But Montag goes rouge, rescuing books after he meets a young girl, who recounts life when people weren’t constantly entertained by wall-to-wall screens and who wear “spider buds” in their ears. “Six of my friends have been shot in the last year alone,” she tells him. “Ten of them died in car wrecks,”

The volume includes Martian Chronicles, published in 1950,about the colonization of Mars between 1999 and 2026. The first Earthlings to arrive on Mars are feared by the inhabitants who dispose of the invaders. But more keep arriving, and by 2026, Earthlings completely occupy Mars and early inhabitants disappear. Mars had become a “tomb island.”

Another novel, Dandelion Wine, contains reflections of Bradbury’s own childhood growing up in Waukegan, Illinois.  Twelve-year-old Douglas Spaulding lives with his family in Green Town, Illinois, where he and his brother run free, amongst an assortment of eccentric and charming community residents. The fourth novel, Something Wicked This Way Comes, is also a throwback to his youth. In this supernatural tale, two boys sneak into a carnival camp and observe evilness but what they witness puts them in danger. It is more a story of the love of a father who believed and trusted.

The volume includes a detailed chronology of Bradbury’s life and his essays, which enhance his writing backstory. It’s a must-read for these times, offering insight into our current lives, perhaps even frightening that the future was so predicable.  “Did it always use to be that way?” the young girl asks, in Fahrenheit 451, certainly now something for us to ponder. 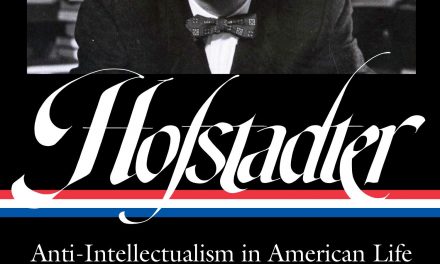 Remember Me This Way by Sabine Durrant