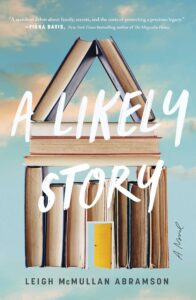 From an early age Isabelle Manning knew she would be a writer. Her father, Ward Manning, is an award-winning, New York Times best-selling author, the darling and doyen of the New York intelligentsia. The fact he’s also egotistical, narcissistic, and selfish to a fault wasn’t immediately apparent to Isabelle until she reached adulthood. Her mother, society belle Claire, protected her from Ward’s failures as a parent, and the two formed a loving tight-knit family within the family—until Claire died unexpectedly.

… a subtle unfolding of a life led living with a celebrity and the struggle to shine on one’s own merits.

Isabelle’s path to literary stardom is proving far rockier than she expected. Her first novel fell flat, and apart from a few articles here and there, she hasn’t achieved much for a thirty-something. True, she lives in the imposing shadow of her father, but certain signs and portents seem to indicate the great Ward Manning is slipping out of the limelight—and possibly life itself. Isabelle’s on-again off-again love affair/friendship with rising legal star Brian Flanagan complicates her life too. When she discovers her mother’s legacy, Isabelle thinks it’ll help her achieve her dream, but instead it reveals a shocking act of betrayal and forces her to face some uncomfortable truths about her ambitions and her family. Can Isabelle weather the storm, find true love, true fame, and reconcile with her father?

Told as a novel-within-a-novel, A Likely Story is a subtle unfolding of a life led living with a celebrity and the struggle to shine on one’s own merits. Abramson deftly portrays Isabelle Manning as not immediately likable, but by story’s end the reader will certainly sympathize with her.

Confessions of a Jane Austen Addict by Laurie Viera Rigler

Why I Wore Lipstick to My Mastectomy by Geralyn Lucas