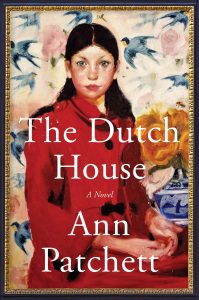 Ann Patchett’s latest novel The Dutch House reads like a modern fairy tale with a house that seems enchanted or damned, depending on which character’s perspective you are grounded in, an evil stepmother, and two siblings, Danny and Maeve, who, through their mother is still alive, are for all practical purposes orphans.

The tale begins with the lives of Danny and Maeve Conroy interrupted by a visit to their home by a woman named Andrea, who will soon become their stepmother. Andrea is fascinated with the family’s house, which was home to the VanHoebeek family who died in debt, their portraits and possessions taken by the bank when the house was repossessed and kept there. The house with its formal furnishings and family portraits is a shrine to a family and a way of life long gone.

Danny describes the well-crafted house as “a singular confluence of luck and talent.”

With windows that “both took in the sun and reflected it across the lawn,” simplicity of design that was either Mediterranean or French and blue Delft mantels rumored to come from a castle in Utrecht, Danny describes the well-crafted house as “a singular confluence of luck and talent.”

The property, which their father Cyril acquired cheaply, is a battleground from the start. Danny and Maeve’s mother Elna is shocked when her husband surprises her with the acquisition and is so repelled by its extravagance and determined to help the poor that she leaves the family to do good works in India. When the children’s father dies, their stepmother Andrea kicks them out of the house and they are forced to rely on each other.

The relationship of Maeve and Danny and their continued longing for the Dutch House, which they park outside of periodically to rehash old memories and resentments, is at the heart of the book.  Maeve is determined to settle the score by encouraging Danny to use up an education trust fund going to medical school. Danny does this, thought his first love is real estate. Maeve, though successful at work, struggles with diabetes and heart disease and remains unattached romantically.

When their mother reenters their lives after a long absence, the siblings find themselves back at the Dutch House trying to reconcile their pasts with the future and determine the legacy that will endure.

The Purple Swamp Hen and Other Stories by Penelope Lively