Book Review: The Heart of American Poetry by Edward Hirsch 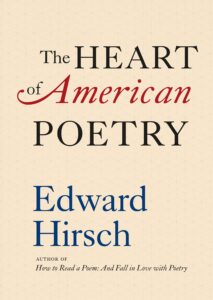 The Heart of American Poetry

Excavating “The Heart of American Poetry” is no easy task but acclaimed poet and critic Edward Hirsch has accomplished exactly that, in his Library of America’s analysis of 40 poems. This monumental journey includes works that have affected Hirsch’s life, weaves his personal experiences with that of the poets and offers lessons on poetic form and the evolution of different poetic styles.

The poems vary, from personal journeys to music, or reflect a historical view point …

His partial autobiography has been in the works for a while, but it wasn’t until Hirsch’s pandemic isolation that he was able to complete his manuscript on American poetry, which, he says, goes back thousands of years, with storytelling by Indigenous peoples, and yet is constantly evolving.

Meant to be read chronologically in time, the books begins with Anne Bradstreet’s “The Author to Her Book,” composed around 1666. Bradstreet, he writes, “navigated during a forbidding world for women” yet became American’s first published poet. The final poem in the collection, “Rabbit is up to Tricks,” was written by Joy Harjo’s in 2002.  Harjo, from the Muscogee Tribe and America’s Poet Laureate, terms her poetry “fixed orality,” connecting her verbal art with oral tradition. In this particular poem, Rabbit’s tricks backfire, causing great harm.

Included in his opus are familiar American poets like Henry Wadsworth Longfellow, Walt Whitman, Ezra Pound, Allen Ginsberg, Sylvia Plath and others, some not so well-known but meaningful to Hirsch. The list includes free-verse poet Amy Lowell (1874-1925), who, according to Hirsch, “was relegated to the margins,” but now her poems have been given a second chance by feminist poets. One example: “Madonna of the Evening Flowers,” is a lyric-structured, passionate lesbian love poem.

Also rewarding is Hirsch’s essay on his personal friendship with Garrett Hongo, and his analysis of “Ancestral Graves, Kahuku,” a poem in which Hirsch travels with Hongo to his Hawaiian birthplace. Hirsch calls its a ‘talking story” of “historical loss and personal recovery.”

The poems vary, from personal journeys to music, or reflect a historical view point, such as “A Bronzeville Mother Loiters in Mississippi, Meanwhile a Mississippi Mother burns Bacon,” by Gwendolyn Brooks, (1917-2000) about the senseless murder of a young Black boy.

For any poet, Hirsch’s book offers additional insight. But it’s also valuable for anyone reading poetry, deciphering meaning, structure and form. It should certainly be a required text for any writing class.

The Ginseng Hunter by Jeff Talarigo