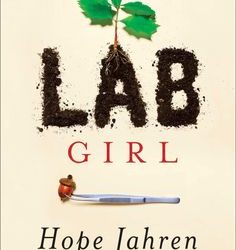 Hope Jahren's Lab Girl  (Alfred A. Knopf, 2016) has been named Winner of the American Association for the Advancement of Science/Subaru Science Books & Film Prize for Excellence in Science Books. Ms. Jahren received the award during the AAAS Annual Meeting in...

Ohlsson Follows Her Heart in Writing The Chosen

The Chosen, Kristina Ohlsson, Washington Square Press – On a cold winter’s day, a preschool teacher is shot to death in front of parent and children at the Jewish Congregation in Stockholm.

“With FIVE DAYS, Douglas Kennedy has crafted a brilliant meditation on regret, fidelity, family, and second chances that will have you breathlessly turning pages to find out what happened in the past and what will happen next. At once heartbreaking and hopeful, it is a powerful new work of fiction by an internationally acclaimed writer at the height of his powers.”

Like Virginia Woolf in The Waves, Meg Wolitzer gives us the full picture here, charting
her characters lives from the self-dramatizing of adolescence, through the resignation of middle age, to the attainment of a wisdom that holds all the intensities of life in a single, sustained chord, much like this book itself.

Making its debut on the New York Times best-seller list in its first week of release, Thunder Dog, by Michael Hingson continues to be a top seller in both print and e-book. Blind since birth, Hingson is inspiring thousands, giving readers a transformative look into the life and boundless capabilities of the blind.

When the impulse to love collides with the animal instinct to survive, who (or what) will remain? Internationally bestselling author Margaret Atwood explores the theme in Erase Me, third installment in her dark comedic e-book series, Poistron.

Newcomer writer Isaac Marion has a new take on the iconic tale of ROMEO AND JULIET. Sure, ROMEO AND JULIET is the classic love story, but its also a story of doomed love. In his brilliant debut novel, WARM BODIES (Emily Bestler Books; $15.00; December 25, 2012), Marion takes matters into his own hands and envisions an entirely new ending for two disparate people who triumph through love.

Former Random House and Penguin Vice President Peter McCarthy provides an insider’s look at the planned merger between the world’s two largest publishing entities, Penguin and Random House. McCarthy has held executive positions at both Penguin Group (USA) and Random House, Inc, where he focused on marketing innovation, digital business development, and corporate strategy, and knows the major players from each organization.