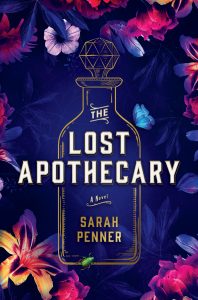 Sarah Penner had more than one hundred rejection for her first novel. But she never gave up. Her second work, THE LOST APOTHECARY, has just been published by Park Row Publishing. The intriguing tale is about a secret London apothecary shop that sells poisons to women to use against their oppressive husbands and lovers.  In this Authorlink video interview, Sarah describes her excitement at having received five offers of representation for her second book, which is now one of the most anticipated titles of the 2021. How did she do it? A lot of hard work. Read and look on.

Sarah Penner’s THE LOST APOTHECARY (Park Row Books; March 2, 2021; hardcover), is a “dark, clever, and wickedly fun” (bestselling author Erika Swyler) debut novel about an 18th century female apothecary serial killer who secretly supplies a network of women with poisons to kill the men who have wronged them.

A stunning exploration of the power of women’s relationships with one another and of women rebelling against the society that limits them, THE LOST APOTHECARY follows three women who change each other’s lives across the barrier of time. Nella is an apothecary who keeps a hidden shop at the back of a dark alleyway in 18th century London. There, she dispenses poisons to liberate women from the oppressive men in their lives. She has two rules: the poison must never be used to harm another woman and the names of the murderer and her victim must be recorded in her register. When 12-year-old Eliza arrives at her shop seeking poison on behalf of her mistress, an unexpected friendship develops setting in motion a series of events that jeopardizes Nella’s world.

In the present-day, aspiring historian Caroline spends her tenth wedding anniversary in London alone, reeling from the recent discovery of her husband’s infidelity. As she reevaluates her life and what she wants she finds a small vial while mudlarking in the River Thames. Intrigued, she throws herself into researching the vile and suspects she’s found the culprit in the never-solved “apothecary murders” that haunted London two hundred years earlier. As she deepens her search, Caroline’s life collides with Nella’s and Eliza’s in a stunning twist of fate.

Penner was initially inspired to write THE LOST APOTHECARY while looking through a book of mudlarking finds in 2016. “Mudlarking is a pastime for many Londoners, having been around for centuries, but recently experienced a resurgence in popularity,” explains Penner. She imagined a story of a woman finding a mysterious vial and tracing its sinister history. Enthralled by the scandal of 18th century London, a time when reliable poison detection methods did not yet exist, and when women had few options for power and influence and were lost to history simply because they did not have an equal say in society, she chose to set the book then. “My book is on way to explore that reality and remediate, even if only in a fictional way,” she writes.

Alternating between 18th century London and the present-day and filled with unforgettable characters, crackling suspense and searing insight, THE LOST APOTHECARY is a bold work of historical fiction that explores female empowerment in a man’s world, vengeance, and secrets.

Sarah Penner is the author of the debut novel THE LOST APOTHECARY from Park Row Books, (March 2021). The book will be translated into eleven territories worldwide. Sarah works full-time in finance and is a member of the Historical Novel Society and the Women’s Fiction Writers Association. She and her husband live in St. Petersburg, Florida with their miniature dachshund, Zoe. To learn more, visit SLPenner.com.

Praise for THE LOST APOTHECARY

*An Indie Next Pick for March*

*A Book of the Month Pick for March*

*The #1 Library Reads Pick for March*

Bustle, Most Anticipated Debuts of 2021

Newsweek, Most Anticipated Books of 2021

Goodreads, Most Anticipated Mysteries of 2021

PopSugar, Most Anticipated Books of 2021

Good Housekeeping, Most Anticipated Books of 2021

“Penner’s debut had me completely under its spell…Riveting and utterly original.”—Fiona Davis,  New York Times bestselling author of The Lions of Fifth Avenue

“Filled with fascinating historical detail… A skilled, captivating debut that celebrates the strength of women across the centuries.”

“Prepare to be consumed by this carefully plotted, propulsive debut.”

—Amy Meyerson, bestselling author of The Bookshop of Yesterdays

“Dark, clever, and wickedly fun, The Lost Apothecary is a true page-turner.”

—Erika Swyler, bestselling author of The Book of Speculation

THE LOST APOTHECARY by Sarah Penner

Jessica Tom Defines What It Takes to Be a Food Whore