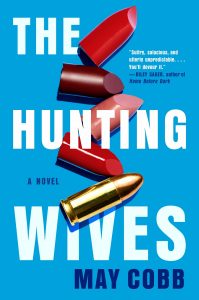 Bad, bougie, bawdy, and bored: a recipe for disaster… and murder. THE HUNTING WIVES, (Berkley Hardcover; May 18,2021) by May Cobb.

Authorlink® talks to May Cobb about her scandalous thriller–sure to have everyone talking this spring. What were her challenges as a new author? How did she land her publishing deal? How did she attract her agent? She answers these and other questions in a video chat with Doris Booth.

The book is May Cobb’s second novel. She wrote the first half of the book in four months, eager to finish and publish something after many years of trying. After querying 12 agents, she signed up, Victoria Sanders on a Friday, and the agent sold the book at auction to Berkley on Monday. Readers will understand why the quick sale when they read May’s work.

In the novel, the red flags start small. A “just one more drink” here. A “swear you won’t tell” there. Then the body of a teenage girl is found in the same wooded area where the women go to shoot skeet. . . and all the evidence points to Sophie.

In THE HUNTING WIVES, Sophie O’Neill is trying to establish her life in Small-Town, Texas but so far she remains on the outside looking in when it comes to the group of women who run the town—in particular the queen bee, Margot Banks. She does what any good millennial would do and uses social media to work her way into Margot’s and her friends’ lives. Once she’s accepted, much to her delight, Sophie is quickly swept up into the group’s dangerous orbit of late-night target practice and extreme partying, utterly blinded by Margot’s alluring power. The more Sophie inserts herself into Margot’s life the more she alienates her own, neglecting her son and putting a strain on her marriage.

Cobb raises the bar for domestic thrillers by taking the already compelling “corrupted nice girl meets murder” trope and making Sophie a complicated, fascinating train wreck of a woman—a refreshing take on the presumably naïve protagonist. Sophie knows what she wants and is willing to do what it takes to get it. What she wants is Margot and thanks to Cobb’s vivid characterization, it’s not hard to understand why. She exudes confidence and sexuality, like Darcey Bell’s Emily in A Simple Favor. You can see the darkness but choose to ignore it in favor of attention from someone who’s approval you desperately crave.

Advance Praise for THE HUNTING WIVES

The author cleverly captures East Texas life while simultaneously making it feel just as exclusive and bougie as Hollywood—a testament to Cobb’s skill. THE HUNTING WIVES is a delightfully shocking novel that will keep you glued to the pages until the very end. Perfect for fans of Samantha Downing and Ruth Ware.

May Cobb earned her MA in literature from San Francisco State University, and her essays and interviews have appeared in the Washington Post, the Rumpus, Edible Austin, and Austin Monthly. Her debut novel, Big Woods, won multiple awards. She lives in Austin, Texas, with her family.

Additional Praise for THE HUNTING WIVES“THE HUNTING WIVES is just like Texas…big, bold, and hot! This spicy novel is filled with unpredictable twists and unforgettable characters, and it’s impossible to put down. Put this book on your 2021 list, you won’t regret it.”—Samantha Downing, USA Today bestselling author of My Lovely Wife and He Started It

“Sultry, salacious, and utterly unpredictable, THE HUNTING WIVES is the kind of book your mother warned you about. You’ll devour it.”—Riley Sager, New York Times bestselling author of Home Before Dark

Penguin Random House, the world’s largest trade book publisher, is dedicated to its mission of nourishing a universal passion for reading by connecting authors and their writing with readers everywhere. The company, which employs more than 10,000 people globally, was formed on July 1, 2013, by Bertelsmann and Pearson. As of April 1, 2020, Bertelsmann is full owner of the company. With more than 300 imprints and brands on six continents, Penguin Random House comprises adult and children’s fiction and nonfiction print and digital English-and Spanish-language trade book publishing businesses in more than 20 countries worldwide. With over 15,000 new titles, and more than 600 million print, audio and eBooks sold annually, Penguin Random House’s publishing lists include more than 80 Nobel Prize laureates and hundreds of the world’s most widely read authors.