If you haven’t yet, go ahead and RSVP now to attend the National Book Awards Ceremony at 7pm ET. Once you RSVP, you’ll be on our list to get all the information about this year’s Awards, where as always, the Winners for Young People’s Literature, Translated Literature, Poetry, Nonfiction, and Fiction will all be revealed live.

Jason Reynolds, acclaimed author, two-time National Book Award Finalist, and current National Ambassador for Young People’s Literature will be the emcee for the evening, as well as the host of our Teen Press Conference on November 16, presented in partnership with the Miami Book Fair. Please make sure you create a login with Miami Book Fair ahead of the event in order to join us! Once you’ve created an account, you can access the event directly by clicking here. 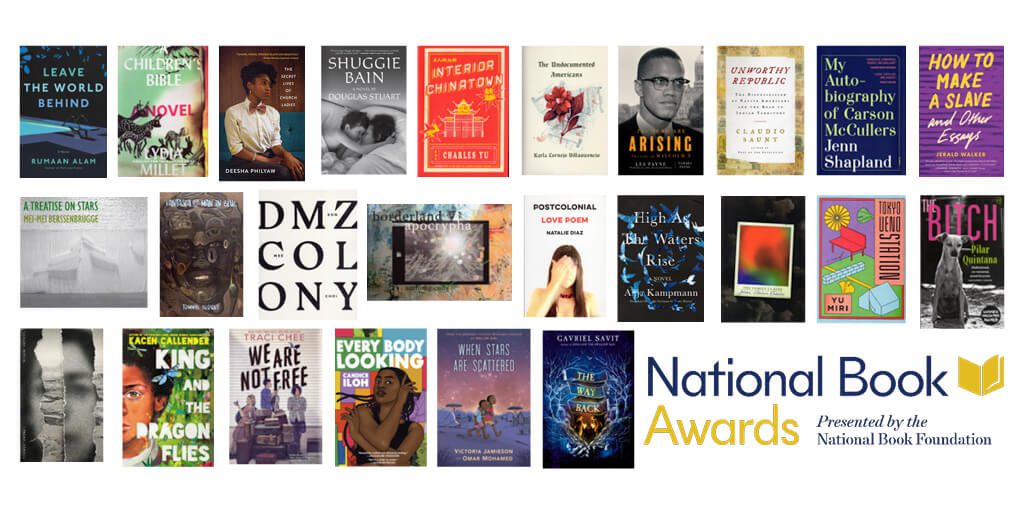 The twenty-five Finalists for the 2020 National Book Awards for Fiction, Nonfiction, Poetry, Translated Literature, and Young People’s Literature (YPL) were announced with the Washington Post online. The five Finalists in each category were selected by a distinguished panel of literary experts, and were advanced from the Longlists announced in September. Between the five categories, there are two writers who have been previously honored by the National Book Awards: Lydia Millet who was Longlisted in 2016 and Charles Yu, a 2007 5 Under 35 honoree. Eight of the twenty-five Finalists are debuts.

Publishers submitted a total of 1,692 books for this year’s National Book Awards: 388 in Fiction, 609 in Nonfiction, 254 in Poetry, 130 in Translated Literature, and 311 in Young People’s Literature. Judges’ decisions are made independently of the National Book Foundation staff and Board of Directors; deliberations are strictly confidential.

The Winners will be announced on Wednesday, November 18 at the 71st National Book Awards Ceremony, which will be held exclusively online. Two lifetime achievement awards will also be presented as part of the evening’s ceremony: Walter Mosley will be recognized with the National Book Foundation’s Medal for Distinguished Contribution to American Letters, presented by Edwidge Danticat, and Carolyn Reidy will posthumously receive the Foundation’s Literarian Award for Outstanding Service to the American Literary Community.

In Leave the World Behind by Rumaan Alam, Brooklyn couple Amanda and Clay head out on a family vacation to Long Island, but their trip turns uneasy when the homeowners seek refuge following blackouts in New York City. As the world outside moves towards greater unrest, the group faces their perceptions about each other and the very concept of safety. Civilization’s future is at stake in A Children’s Bible by Lydia Millet, who holds a master’s degree in environmental policy. The cast of young characters in Millet’s novel easily fend for themselves as their parents remain indifferent to the devastation of the world around them in allegorical tale that defies rationalizations about climate change. The Secret Lives of Church Ladies by Deesha Philyaw draws us into the multifaceted lives of Black women across several generations as they engage in self-discovery and seduction. In Philyaw’s first work of fiction, her characters push the boundaries of thought around morality, Christianity, and their community’s expectations. Set in Glasgow in the 1980s, Shuggie Bain by Douglas Stuart is an epic portrayal of a working-class family haunted by alcoholism. Each of their experiences are portrayed with great care through the eyes of lonely Hugh “Shuggie” Bain, who finds himself at the margins of his own family. Everyone embodies a role in Interior Chinatown by Charles Yu and protagonist Willis Wu strives to land the best one available to an Asian-American man: Kung Fu Guy. Yu’s novel takes the concept of allegory and uses the familiar landscape of Hollywood tropes to create a nuanced, heartfelt, and stylistically unique portrait of Asian-American identity.

The Undocumented Americans by Karla Cornejo Villavicencio is a keenly reported work in which former DACA recipient Cornejo Villavicencio profiles undocumented people across the country, focusing on their inner lives and value beyond their status and contributions to the economy. The results of decades of research, The Dead Are Arising: The Life of Malcolm X by Les Payne and Tamara Payne is a fully realized portrait of Malcolm X. Pulitzer Prize winner Les Payne set out to interview anyone who had ever known Malcolm X, and after his death in 2018, his daughter and researcher Tamara Payne completed his work. Claudio Saunt turns a historian’s eye on President Jackson’s 1830 Indian Removal Act in Unworthy Republic: The Dispossession of Native Americans and the Road to Indian Territory. Drawing on firsthand accounts and numerous records produced by the federal government, Saunt reveals how the removal of Native Americans was calculated and connected to the growth of the uniquely American form of capitalism. While interning at the Harry Ransom Center in Texas where the papers of writer Carson McCullers are held, Jenn Shapland discovers letters between Carson McCullers and Swiss writer Annemarie Schwarzenbach that imply a romantic relationship between the two. In My Autobiography of Carson McCullers, Shapland plumbs the depths of the Southern writer’s life as well as her own, addressing how queer love stories are hidden and finally told. Jerald Walker’s collection How to Make a Slave and Other Essays includes reflections on the author’s experiences in academia such as racial profiling by a campus security guard, accounts of discussing race with his children, and contemplations on disability and family, all told with a wry comedic eye and deep honesty.

Mei-mei Berssenbrugge’s thirteenth collection of poems, A Treatise on Stars, implores that we connect with the larger natural and cosmic world. Two Finalists for Poetry are debut collections, Fantasia for the Man in Blue by Tommye Blount and Borderland Apocrypha by Anthony Cody. The title poem in Fantasia for the Man in Blue is a series of poems ranging throughout the book, a quartet that speaks to the experience and threat of police violence upon Black people. The complex and layered collection is drawn from reality, and exemplifies how desire lives in proximity to the danger of being a marginalized body. A work of documentary poetics, Borderland Apocrypha details the history of trauma and survival at the U.S.-Mexico border. Cody utilizes imagery, historic documents, multi-lingual erasure poems, and more to force a reckoning with history’s silence. Deeply rooted in the personal and political, DMZ Colony by Don Mee Choi is structured in eight sections and includes transcriptions of conversations with activist Ahn Hak-sop, her father’s work as a photojournalist, hand-written texts, and more. Choi deftly explores the histories of South Korea and the United States via her return from South Korea in 2016 after years of living in the states. Natalie Diaz‘s second collection, Postcolonial Love Poem, engages with love and history in an anthem of desire against erasure while simultaneously celebrating her survival as an Indigenous queer woman.

Translated from the German by Anne Posten, High as the Waters Rise by Anja Kampmann explores the emotional life of an oil rig worker whose bunkmate fell into the sea and drowned, setting off a chain of events that force his reckoning with the exploitation of natural resources. Jonas Hassen Khemiri’s The Family Clause, translated from the Swedish by Alice Menzies, provides insight on one family across a span of only ten days, during which relationships change and memories are brought to the surface. In Tokyo Ueno Station by Yu Miri and translated from the Japanese by Morgan Giles, ghost narrator Kazu visits the park in which he last lived as a homeless man. As the book unfolds, the reader learns more about his earlier years and the ways in which Japan’s modernization pushed many to the margins of society, where they were subsequently ignored. The Bitch by Pilar Quintana is a portrait of a woman wrestling with abandonment, love, and her need to nurture. Translated from the Spanish by Lisa Dillman, the narrative follows the main character’s adoption of a dog that disappears into the jungle; when the dog returns, she nurses it to health but when it flees once more, there are brutal consequences. Written by Adania Shibli and translated from the Arabic by Elisabeth Jaquette, Minor Detail is split between two interrelated narratives, the latter half following a young woman’s search to discover more about the tragic murder of a Palestinian teenager in 1949, who died the day she was born.

In King and the Dragonflies, Kacen Callender’s protagonist Kingston James deals with grief, sexual identity, and the perceptions and expectations of family. Traci Chee’s work of historical fiction We Are Not Free follows fourteen teenage narrators whose lives have been changed by the forced removal of people of Japanese ancestry from their homes during World War II and includes photographs and documents from the time period, enhancing this portrait of a harrowing time in our nation’s history. Told in verse, Candice Iloh’s protagonist Ada reckons with her past while her exploration of dance grounds her in her body and points a way forward in Every Body Looking. The graphic novel When Stars Are Scattered is written and illustrated by the Newbery Honor winner Victoria Jamieson and based on interviews with co-author Omar Mohamed. Their work chronicles the years Mohamed spent in a Kenyan refugee camp, where limbo and hope co-exist as he awaits news about resettlement and watches the lives of those around him change. Jewish folklore infuses The Way Back by Gavriel Savit, in which two young people travel into a world of spirits and demons and must find their way home to their nineteenth-century shtetl Tupik in Eastern Europe.

The 71st National Book Awards Ceremony will be streamed on YouTube and also available at the Foundation’s website, www.nationalbook.org. Winners of the National Book Awards receive $10,000 and a bronze medal and statue; Winners and Finalists in the Translated Literature category will split the prize evenly between author and translator; Finalists receive $1,000 and a bronze medal.