Young Woman Deals with Multiple Selves That Complicate Her Life 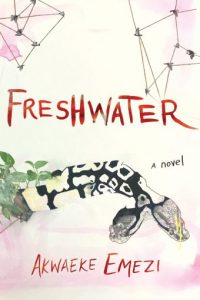 Freshwater, Akwaeke Emezi, Grove Atlantic – Ada has multiple selves who inhabit the marble chamber of her head and manifest themselves in her interactions with her family, friends and especially the men who have the misfortune of meeting one of her dominant selves. When she was a child, she saw a snake in the bathroom and eventually recognized it as her mother, not the thin woman who had born her as a fetus. Ada was born in Nigeria but comes to America to attend college where the interactions of her multiple selves continue to complicate her life.

EMEZI: Freshwater is an autobiographical novel, so I used the archive of my life as a chronological skeleton for the story and my imagination for the rest.

Freshwater is an autobiographical novel, so I used the archive of my life as a chronological skeleton for the story . . .

AUTHORLINK: What about the Igbo gods did you glean from tradition and what did you imagine for your story?

EMEZI: There’s only one Igbo deity mentioned in Freshwater (Ala), but the book’s main character Ada is an ogbanje — a spirit child, so to speak. You can think of her as a singular collective or a plural individual, so all the selves who narrate the book are her and she is them. Igbo deities are real and contemporary entities, as are ogbanje, and Freshwater was based on my lived experience with the former and as the latter.

AUTHORLINK: What research did you do?

EMEZI: I wanted to learn more about Igbo ontology, so I did a lot of research in that area. I’m actually putting together a reading list for Freshwater that includes the texts I used for my research because a lot of readers are curious about the concepts the book is centered in and want to engage with material on that, so I think it’ll be helpful.

AUTHORLINK: Did you plan most of Ada’s struggle with Asughara and other entities or did it come out as you wrote?

Ada’s struggle with her other selves was one of the more autobiographical aspects of the book . . .

EMEZI: Ada’s struggle with her other selves was one of the more autobiographical aspects of the book, to be quite honest. It had already happened to me, so I just had to write what was true and make it a good story.

AUTHORLINK: Do you think your story has significance related to how mental illness is treated and viewed?

EMEZI: I hope my story provides an additional lens for how we can view neurodivergence in people.

AUTHORLINK: How did the process of attempting to sell your first novel go? How did you find an agent and then how did the book sell?

I signed with my first agent after publishing my first short story in 2014, after which I wrote Freshwater.

EMEZI: I signed with my first agent after publishing my first short story in 2014, after which I wrote Freshwater. In 2015, I attended the Farafina Creative Writing Workshop in Lagos, with Binyavanga Wainaina and Chimamanda Adichie as faculty. Binyavanga read my manuscript for Freshwater and supported it immensely, introducing me to my current agents at the Wylie Agency. Freshwater went out on submission in late 2015, but every editor turned it down except Peter Blackstock at Grove Atlantic, who then acquired it in 2016. Freshwater has done pretty well since then — it’s only been out since February and it went into its fourth printing back in March.

AUTHORLINK: What have you published before the novel? Did you have earlier unpublished novels? If so, how did your previous work help you with this one?

EMEZI: I had published short fiction and nonfiction, all of which are up on my website (akwaeke.com), but Freshwater is the first novel I ever wrote.

EMEZI: My first young adult novel, Pet, will be published in 2019 by Make Me a World, Christopher Myers’ imprint in partnership with Alfred A. Knopf Books for Young Readers. I’m really excited about that!

About the Author: Akwaeke Emezi was born and raised in Nigeria She holds an MPA from New York University. She wrote her novel with the MFA program at Syracuse University, The Callaloo Creative Writing Workshop and the Caine Prize Writing Workshop. She has been published by Vogue.com, Buzzfeed, The Cut and more. Freshwater has been praised by the New York Times, the New Yorker, ELLE, Cosmopolitan and many other publications.

Easy as Pi: An interview with Wendy Mass

Mick Brown: Tearing Down the Wall of Sound, The Rise and Fall of Phil Spector