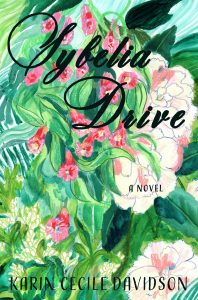 In Sybelia Drive, author Karin Cecile Davidson offers a kaleidoscopic look at the lives of the residents of a small lake town in Florida amidst the tensions of the Vietnam War. The novel chronicles the coming of age of Rainey and Lulu, girls brought together by their mothers’ friendship and their fathers’ absence, and features a broad cast of characters including Lulu’s restless brother, Saul, neighbors, soldiers, and a young Vietnamese girl, whose life is forever changed by the war. Davidson shares lessons she learned along the way, how the novel found its form, how to make powerful use of objects, and advice for writers facing a lull in their work.

“What does it take to make a great writer? About twenty years. I think Flannery O’Connor said that, and it’s true. Being present with words every day helps move you in that direction,” said Davidson.

An avid reader since childhood, she nurtured her interest in writing by attending workshops including the Sewanee Writers’ Conference and the Kenyon Review Writers Workshop, and by earning an MFA at Lesley University.

She credits teachers including Laurie Foos, Nancy Zafris, Margot Livesey, Steve Yarborough, and the late Wayne Brown and the late Lee K. Abbott with offering vital lessons, encouragement, and support. “In 2012 I was in a workshop with Lee who posed the question, ‘Who are we writing for?’ His answer was to write for the lady on the bus,” said Davidson.

Abbott also had the students write a story single-spaced on the page (as it would appear in print). “It is a whole different feeling writing something compressed on the page like that. It took me in a new and exciting direction. From this prompt, I eventually ended up with what may become a novel set in New Orleans,” said Davidson.

Each piece she writes is prompted in a different way. “Sybelia Drive came from a memory, a pair of characters, and a question I had,” said Davidson. “When I started writing, the war in Afghanistan and Iraq was very present. There was a parallel to the weighted silence of soldiers returning home in the mid-2000s to that of the men and boys who returned from Vietnam in the early 1970s. They were emotionally changed and didn’t want to talk about what they’d been through, and we knew enough not to ask. Still, the question remained in my mind.”

Though Vietnam thrums in the background, Sybelia Drive is a novel of the Homefront. It focuses on the children and women who are left behind, the boys and men who never come back, and the ones who return forever altered. “I grew up in Florida until I was seven and returned throughout my childhood. I tried to capture the tang of the citrus, the loam of the soil, the humidity, as well as the memory of community, of the ties to that time.”

The story is told from a variety of voices and slips back and forth in time creating layers of meaning as it unfolds. Davidson attributes the multiple voices to those created by war and describes the novel’s structure as a wheel with Florida at the hub, Vietnam as the rim, and the characters as spokes that connect the two, with the wheel’s forward and backward revolution as the narrative drive.

“A range of voices arrived as I wrote, which in turn taught me the structure.”

After starting with the chapter “Forever and a Day,” originally a story from the character Rainey’s perspective, Davidson was left with questions she felt she needed to answer, including why Lulu was so angry and why Saul was so quiet. “A range of voices arrived as I wrote, which in turn taught me the structure.”

Davidson drew from a number of models, Louise Erdrich’s Love Medicine, Elizabeth Strout’s Olive Kitteridge, and Joan Silber’s Ideas of Heaven and The Size of the World. She also read Faulkner’s As I Lay Dying and saw the importance of creating voices that were differentiated.

“I kept to my vision of the novel, and it went to a small press (Braddock Avenue Books).”

When her agent, Valerie Borchardt, with the New York-based literary agency, Georges Borchardt, Inc., sent the book to publishers, a number liked it, but many wanted it told by a single point-of-view character, Lulu, in the vein of To Kill a Mockingbird.

“I kept to my vision of the novel, and it went to a small press (Braddock Avenue Books). Their edits were spot on. They understood my vision. The enthusiastic response from readers about the novel’s many viewpoints and resulting structure has made me glad that, despite others’ opinions, I didn’t compromise,” said Davidson.

The book is full of very particular objects (charm bracelet, duck call, fireflies) that form a through line and build meaning in the story. “There are always objects that appear like little gifts when I’m creating characters. Rainey’s charm bracelet is a signifier of the 1960s. Lots of girls had them and I even remember wanting one. Lulu, who wants so many things she can’t have, wants Rainey’s bracelet, and Rainey know that if she fastens the jangling charms around LuLu’s wrist, she’ll be able to hear her coming,” said Davidson. The bracelet reminds Rainy of her missing mother, and a simple missing-in-action bracelet (which Rainey wears) is a reminder of her father.

Rainey, who is quiet, and Lulu, who gets into trouble, form a bond in childhood that sees them through teenage misadventures and to young adulthood. The story also includes Royal, Lulu’s father who returns from war; Alan, a young soldier who doesn’t come home; Titus, a friend of Royal’s from the service; and James, a young solider that Rainey becomes involved with.

When researching the book, Davidson talked to Marines who had served in Vietnam and who said the emotional landscape of war was most important thing to capture. “The biggest challenge I had was to get Vietnam on the page with respect and honor for the men and women who had been in the war and affected by the war. Upon returning, many of them were not welcomed back in the way they should have been, and there was profound collateral damage both in the US and Vietnam.”

“Don’t be afraid to sit down and put pen to paper.”

With Sybelia Drive out in the world, Davidson is working on a collection of gulf coast stories and a set of stories prompted by Jessica Lange’s photographs of Highway 61. From her own experience, she advises, “Don’t be afraid to sit down and put pen to paper. If time passes, don’t guilt-trip yourself. You’ll get back to the work. Even twenty minutes of work a day can be a balm to the soul.”

Karin Cecile Davidson is originally from the Gulf Coast. Her novel Sybelia Drive was published by Braddock Avenue Books in Autumn 2020. Her stories have appeared in Story Magazine, The Massachusetts Review, Five Points Journal, Colorado Review, The Los Angeles Review, Passages North, Post Road, and elsewhere. Her awards include a collaborative Ohio Arts Council & Fine Arts Work Center in Provincetown Residency, an Atlantic Center for the Arts Residency, a Studios of Key West Artist Residency, an Ohio Arts Council Individual Excellence Award, an Orlando Prize for Short Fiction, the Waasmode Short Fiction Prize, and a Peter Taylor Fellowship. Her fiction has been shortlisted in the Glimmer Train Short Story Award for New Writers and the Faulkner-Wisdom Writing Competition, among many others. She has an MFA from Lesley University and is an Interviews Editor for Newfound Journal.