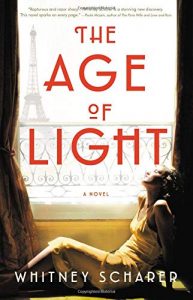 Lee Miller’s flawless beauty made her a photographer’s dream, starting with her father when she was a child and continuing as a fashion model into her twenties. But her dream soon became a desire to be on the other side of the camera.  In Paris, in 1929 she meets famed photographer Man Ray. She becomes his assistant, model, and lover as she develops her own creativity and craft. While Lee even discovers techniques on her own, she comes to feel constrained living in Man’s shadow.

AUTHORLINK: What drew you to the story of Lee Miller and Man Ray?

“I was inspired to write about Lee Miller after visiting an exhibit at the Peabody Essex Museum.”

SCHARER: I was inspired to write about Lee Miller after visiting an exhibit at the Peabody Essex Museum in Salem in 2011 called Lee Miller + Man Ray: Partners in Surrealism. Though I had studied photography for many years, I had never heard of Lee before seeing the exhibit. I was instantly captivated by her and so impressed by her talent. I was also annoyed—at myself for not knowing who she was, and at the world for not making her as big a name as Man Ray. Her life was incredible, and her passionate, tumultuous relationship with Man Ray was fascinating. I loved thinking of the power Lee had over Man, how that must have felt.

AUTHORLINK: Did you already have knowledge of photography, art, Paris and other aspects of your story or did you learn it all researching the book?

SCHARER: I studied photography in high school and college—both its history and the technical aspects of darkroom work. Now that most photography is digital, I miss darkroom work, so it was fun to be able to spend time in a fictional darkroom while writing the novel. I did a lot of research about Paris and Surrealism in order to write the book. The interwar period in Paris is such an incredible era—the sheer amount of creative work that was produced in the city astounds me. It was a joy to learn more about it for my novel.

AUTHORLINK: How did you do your research and how long did it take?

SCHARER: I began by doing two years of research before I wrote a word of the book. I wanted to become deeply enmeshed in the time period and in Man Ray and Lee Miller’s lives, so I read biographies, travelogues, art history books, and contemporaneous fiction.  I also immersed myself in visuals from the period. I’m a very visual writer, so images often served as jumping off points for scenes. Throughout the writing process, I tried to balance my love of research with my desire to bring the characters to life—sometimes I think the sheer weight of research can bog historical fiction down, and I wanted to avoid that.

AUTHORLINK: In writing a novel where historic people are the main characters, you have to fill in a lot of gaps. Most of what they do and say in private isn’t usually recorded. How close did you stay to known facts and base what you had to fill in on your understanding of their personalities?

“Being able to imagine something is the entire reason I write.”

SCHARER: This is a fantastic question and something I’ve spent a lot of time thinking about. As a fiction writer, imagination is my currency. Being able to imagine something is the entire reason I write. But many of the characters I wrote about in The Age of Light are real people, and I wanted to do justice to who they were in real life. As I was writing, I wanted to make sure I could draw a straight line from a fact I read about my characters to an action I had them doing in the novel. So even if something didn’t happen, I felt that it could have happened, based on what I had read about them.  That said, the novel is fiction, and if you were to pick up a biography of Lee Miller, you’d see that I invented all sorts of things and omitted many other things from her history. It’s my greatest wish that readers will pick up a biography of Lee Miller after they read my novel—that they’ll be so inspired by my telling of her life that they’ll want to learn the real story behind my story.

AUTHORLINK: It seems that often when a brilliant and talented couple work together, the man doesn’t even seem aware of how much he is sapping from the woman, frustrating and claiming her genius. Albert and Mileva Einstein come to mind. Can you comment on that in a historical context? Do you think we’ve grown beyond that as a society?

SCHARER: Sadly, I do not think we’ve grown beyond this as a society, and I think that’s why The Age of Light is resonating with readers. I think things have improved since the 1930s, but women struggle with many of the same issues today that they did one hundred years ago. The difference is that we’re more aware of the issues and more willing to talk about them, which is how we are slowly effecting change.

AUTHORLINK: How did your earlier work, your short stories, help you in writing and selling your first novel?

SCHARER: Any writing and reading you do helps you become a better writer. The craft of writing fiction is the same whether you are writing a piece of flash fiction or an epic novel. The key is to write, write, write! And read, read, read: read published novels and read other people’s work in creative writing workshops. And talk to other writers about what’s working and not working in their work and your own work. It’s amazing what you can learn from critiquing works-in-progress.

AUTHORLINK: What advice do you have for someone who is hoping to write and sell a historical novel?

“Spend the time to make your work the best you can make it.”

SCHARER: I think my advice would be the same for anyone writing any kind of novel, not just a historical one. Spend the time to make your work the best you can make it. Don’t seek out an agent or publisher until you’ve done everything you can to produce the best book you’re capable of writing. You don’t want to send rough work out into the world and squander a chance to find your dream agent or dream publisher.

SCHARER: I’m working on another piece of historical fiction, set in Colorado during the silver rush in the late 1800s. A very different world than bohemian Paris! I’m from Colorado, so the American West is near and dear to me.

About the author: Whitney Scharer earned her MFA from the University of Washington. She has published short stories in the Bellevue Literary Review, the Cimarron Review, and other publications. She has received awards from the St. Botolph Club Foundation, Somerville Arts Council and the Virginia Center for the Creative Arts. She lives near Boston with her husband and daughter. Age of Light is her first novel.

Ron Rash Explores Time in Nothing Gold Can Stay

Smith Explores the Life of George Eliot in Honeymoon 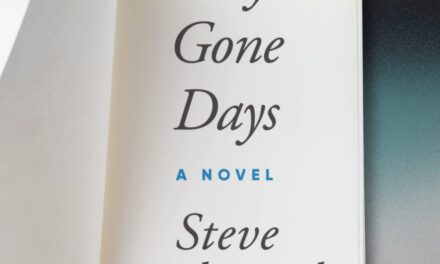