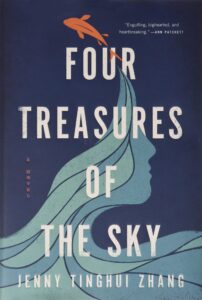 Four Treasures of the Sky

Daiyu was named after a tragic figure in a popular story. She lived in a small village in China until her parents disappeared when she was 12. Her grandmother disguised her as a boy and sent her to the city to make her own way. Briefly, she thrived learning calligraphy from a Master, but she was kidnapped and shipped to a San Francisco brothel, eventually making her way to Idaho, once again, in male disguise. Always wanting to return to China, she struggles with life in the American West as anti-Chinese racism grows.

AUTHORLINK: Where did the idea for this story come from?

“The first seed for this story came from my father…”

ZHANG: The first seed for this story came from my father, who was driving through Idaho and came across a historical marker on the side of the road near a town called Pierce. The marker detailed an event in 1885 when five Chinese men were hanged by local white vigilantes for the murder of a storeowner. My father brought this story back to me and asked me if I could write out the rest of the story for him, so that he could figure out what happened.

ZHANG:  I initially planned to explore the lives of these five men leading all the way up to the hanging. As I did research on how Chinese people were getting over to the United States around the time of the Exclusion Act, I found a scholarly article that talked about Chinese girls who were stuffed into buckets of coal or crates of China and shipped across the ocean. It was this image of a girl in a coal bucket that shifted the course of the novel for me and created the main character and narrator Daiyu.

AUTHORLINK: Did you plan ahead most of the story and how the characters would turn out, or did much develop as you wrote?

“I had a loose idea of the trajectory of the novel…”

ZHANG: I had a loose idea of the trajectory of the novel, as I always knew what the ending would be and the three or four key moments that I wanted to happen. But as much as I tried to outline, everything kept shifting and changing depending on where my characters were in their own internal journeys. So, maybe it was a bit of both.

AUTHORLINK: Can you tell some about how the calligraphy Master Wang’s philosophy heavily influenced Daiyu?

ZHANG: Daiyu learns early on about the practice of calligraphy, which shapes her worldview and helps her navigate all the challenging situations she encounters after she leaves the calligraphy school. It’s a way for her to interpret the people, places, and things that happen to her–a sort of framework of understanding. Because so much of calligraphy (and the various schools of thought around calligraphy) is imbued with eastern philosophy, morality, and religion, it seemed inevitable that it should serve as Daiyu’s backbone in the story. At the same time, her aspiration to become a master calligrapher is closely tied to her desire to become her own person, one who is not beholden to her namesake Lin Daiyu.

AUTHORLINK: There is much that you had to know to write this story, of both China and the American West. What research did you do?

ZHANG: As this was my first foray into writing anything remotely historical, I initially felt overwhelmed by the research at hand. There was so much I didn’t know about: the Chinese Exclusion Act, the history of Chinese exclusion and violence in America, the Chinese immigrant experience in the West, the state of China in the late nineteenth century, San Francisco Chinatowns and brothels, and Idaho itself. Calligraphy and The Dream of the Red Chamber (which is where Lin Daiyu comes from) were also unknown to me. Then, there were the smaller things, like clothing and fashion, currency, the language and rhetoric of the time, and what Idaho prisons might look like. Now that I’m writing this all out, I’m realizing that basically, everything was research!

My advice for anyone writing historical fiction is to do the research in phases, and to stagger it with your writing. With each draft, I’d do a little more research and layer it into the manuscript. If I had done all of my research up front, I don’t know if I would have ever started writing as I did.

Of course, I read as many books about these topics as I could. I must have looked through at least one hundred scholarly research articles and essays. Because so much of this book was written during the beginning of the pandemic, I relied on the internet for understanding what China, San Francisco, and Idaho looked like at that time.

AUTHORLINK: Now, 140 years later, we still see senseless anti-Chinese attacks.  Your book deals with this and much more. What can readers learn from your story?

ZHANG: I think the most important thing is realizing that this isn’t something new or unprecedented. Actually, it has been happening since the nineteenth century. It is hard for me to say where we go from here, because I don’t know the answer. But I do think acknowledgment and recognition is a start.

ZHANG: I am currently working on my second novel, which I am keeping close to my chest 🙂

About the Author: Jenny Tinghui Zhang was born in Changchun, China and grew up in Austin. Texas. She has an MFA from the University of Wyoming. She has published fiction and non-fiction in Apogee, Ninth Letter, Passages North, The Rumpus, HuffPost, The Cut, Catapult and more. She lives in Austin. Four Treasures of the Sky is her debut novel. 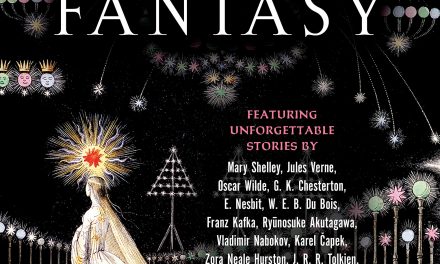