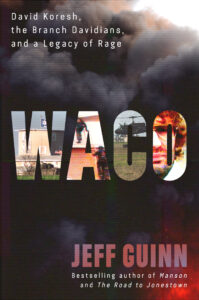 and a Legacy of Rage

In the video, Jeff talks to Authorlink® in detail about his latest book, WACO, a definitive account of the disastrous siege at the Branch Davidian compound in Waco, Texas.

Jeff provides insights into Vernon Howell’s (AKA David Koresh’s) personality and the leader’s special privileges as a messiah. The author also explores who’s at fault for the two bungled government raids on the religious compound. In the initial raid, on February 28, 1993, four ATF agents and six Branch Davidians died. The second siege on April 19, 1993, ended in a disastrous fire that killed 53 adults and 23 children.

WACO, the book, features never-before-seen documents, photographs, and interviews, from Jeff Guinn, a former investigative reporter and bestselling author of Manson and The Road to Jonestown. Devoting more than two years of hard work and research to the book, Jeff Guinn dispels the mythology surrounding the Branch Davidians and provides a clear understanding of the tragic events.

For the first time in thirty years, more than a dozen former ATF agents who participated in the initial February 28, 1993, raid speak on the record about the poor decisions of their commanders that led to this deadly confrontation. Revelations in this book include why the FBI chose to end the siege with the use of CS gas; how both ATF and FBI officials tried and failed to cover up their agencies’ mistakes; where David Koresh plagiarized his infamous prophecies; and direct links between the Branch Davidian tragedy and the modern militia movement in America. Notorious conspiracist Alex Jones is a part of the Waco story. So much is new and stunning.

Guinn puts you alongside the ATF agents as they embarked on the disastrous initial assault, unaware that the Davidians knew they were coming and were armed and prepared to resist. Drawing on this new information, including several eyewitness accounts, Guinn again does what he did with his bestselling books about Charles Manson and Jim Jones, shedding new light on a story we thought we knew.

Full video interview offers a look inside this extraordinary book through the author’s eyes.

Jeff Guinn is a former award-winning investigative journalist and the bestselling author of numerous books, including Go Down Together: The True Untold Story of Bonnie and Clyde, The Last Gunfight: The Real Story of the Shootout at the O.K. Corral and How It Changed the West, and Manson: The Life and Times of Charles Manson. Guinn lives in Fort Worth, Texas.

Most Popular Books by Jeff Guinn

The Muralist Blends Art and History in a Compelling Tale

Juska Explores Family and Identity in The Blessings – 2014