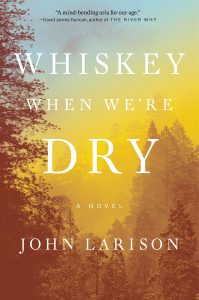 Whiskey When We’re Dry, John Larison, Viking – Jessalyn Harney’s mother dies giving birth on the family’s struggling ranch on the frontier, leaving her father and brother, Noah, to raise her. Noah runs off, her father dies and, at 17, Jessalyn can’t handle the ranch on her own. Shortening her name to Jesse, she dresses as a boy and uses her skill with a six-gun to make her way through the west in search of her brother, now a famous outlaw.

AUTHORLINK: Where did your ideas for this story start?

LARISON: For me, novels begin like rivers, a hundred minor springs of inspiration converge into a torrent. Whiskey When We’re Dry’s headwater spring was a year I spent as a child living on a wildlife refuge in the remote American West where ranchers grazed their cattle. My brother and I were taken into the community at events like branding and 4th of July, where we learned to lasso, shoot revolvers, and spit tobacco. During that year, I developed a little boy’s crush on a certain rancher, a roughriding woman named Sherry, who wore leather through her braids and spurs that rattled with every step and cursed with more authority than any of the men. Later in life, I started reading Western novels, always on the hunt for Sherry, but could never find her.  Now, looking back on Whiskey, I see Sherry’s influence on nearly every page.

AUTHORLINK: Did you always plan to write it as Jesse telling the story from years hence with occasional brief foreshadowing? Why did you go for that technique?

LARISON: The pleasure of writing is the same pleasure I take from reading: that sense of exploring a new world one page at a time. I’ve always felt more like Whiskey’s first reader than like the novel’s architect.  For me, the story was born from the first lines on the first page; just like the reader, I didn’t know who was talking, but I could sense a reflective and conflicted tone. By the end of the first day of work, I knew the narrator was looking back on his or her youth during America’s western settlement.  By the end of the second or third week of writing, I knew that our narrator was born Jessilyn Harney.  The foreshadowing you mention grew organically during revision efforts; knowing what happened to Jesse at the end of the story, I would hear her adding a sentence or two referencing the future—just like the elderly folks in my life do while reflecting on an event from their youths. For me, every element of the book from its plot to its characters grew from listening to Jesse’s voice.

AUTHORLINK: How long did you work on this book and what took most of the time? Did you do historical research and draw on your own experiences?

LARISON: The book took eight years to complete (I had a lot to learn about writing). The first draft was complete by the end of the second year, and the remaining six years were consumed with revisions, each bolstered by new research experiences.  I found great insights by reading the letters that early pioneers sent home, and by interviewing ranchers with family histories dating back to the 19th century, and by interviewing my contemporaries who have survived violence; in all of these experiences, I was learning patterns of thought that helped me bring the psychological aspects of the novel’s characters to life.  But to write some scenes persuasively, those involving visceral descriptions, I had to have some of Jesse’s own experiences. To that end, I rode horses across sagebrush plains, churned butter, fed livestock in winter, chewed loose leaf tobacco, learned to quick-draw, etc.

AUTHORLINK: Do you think it was easier for Jesse to pass as a man since she was raised with barely any contact with women?

LARISON: From my vantage point, Jesse is never comfortable or content as a woman, and she is never comfortable or content as a man. About three-quarters of the way through the novel, I hear Jesse transcending both pronouns to become something that is purely, simply Jesse Harney. Some readers argue Jesse is this way because of a shortage of female influences in “her” early years, and others want to suggest Jesse’s gender identity (to use the modern phrase) grows from some biological factor. As a writer, these issues didn’t matter to me because my concern wasn’t with society’s labels for Jesse; all that mattered to me was hearing and faithfully transcribing Jesse’s own true, authentic story. I thought of Jesse as a close friend; when we’re enjoying the presence of our close friends, we don’t think about the labels society might assign them (gender, race, national origin, etc)—we think only of the essential human being whom we cherish. Writing Whiskey taught me to believe that our essential self lives on a stratum far deeper than our gender identities. The writer’s job—like the job of a true friend—is to hear the story of the essential self, not the story of the labels.

AUTHORLINK: Can you explain the significance of your title?

LARISON: The title came late in the process, but once it did, the book’s thematic movements were unlocked to me; I could finally see the book in its purest form (and adjust a few last elements into their most natural shape). For me, the title is a metaphor that describes the book—and American culture—on many levels. As a people, Americans enjoy the rush delivered by a shot of whiskey, but whiskey makes us thirsty, which leaves us in a quandary: do we have another shot of whiskey (which will be exciting and refreshing, but will also leave us even more thirsty later), or do we reach for the water? As a culture, Americans have been reaching for the whiskey for a long time. (The current political moment, in my opinion, has people on both ends of the spectrum guzzling). I think that if we’re to survive as a nation, we’ll need to reach for the water soon.  Jesse taught me how to find the water in my own life.

AUTHORLINK: How do you think your book fits in with the tradition of western stories? Do you see the genre maturing? For instance, including more women and races, more complex, complete characters, more truth?

LARISON: I see the western as a mirror for American identity, and that mirror has been reflecting just one vision of American identity for far too long. Which can be dangerous, I think, as many in this country read the genre as literal American history, rather than the foundation myth that the genre truly is. The western is our country’s longest-standing literary genre, but its evolution has been stunted by the long shadows thrown by figures like John Ford and Louis L’amour.  May the coming decades bring more westerns that reflect a fuller, more complex, and ultimately truer vision of our collective identity. A country needs its foundational myths to ring true.

AUTHORLINK: What is happening in the development of the movie?

LARISON: Westerns have a long tradition in Hollywood of course, where the form’s reflection of American ideals is widely celebrated. Whiskey When We’re Dry was very lucky to end up with writers and producers who share the book’s ambition and vision. I’m a consultant on the screen adaptation, and as such I’ve been to LA twice to discuss the project; it has been heartening to see the passion and focus the team is bringing to the adaptation. We’re all very much on the same page. I expect Jesse to come to the screen in long-form, a limited series most likely. Some elements of the book that were cut during editing for brevity’s sake will feature in the adaptation, which is exciting. I’m looking forward to (finally) seeing a western with a cast as diverse as the actual demographics of the historic West.

AUTHORLINK: What do you hope readers get out of your book besides enjoying a good story?

LARISON: I think of Whiskey as a coming-of-age story, both for Jesse Harney and America itself. I worry that Americans today are losing one of our defining traits, and maybe our most important: faith in our collective capacities. I’d also argue we’re in danger of becoming a nation hamstrung by self-pity, a counterproductive emotion that leads to passivity, acquiesce, and resentment. Self-pity can always be justified by a selective look at our lives, just as it can also be overcome by widening the frame of our observations to include those who are less-fortunate; as such, self-pity is a choice we make. Jesse has plenty of cause to feel self-pity, but she doesn’t let herself drink that poison. She learns to keep her gaze trained on those reasons she has for feeling gratitude, as well as those actions she can take to help those in her care. Though Whiskey has dark chapters, it is ultimately a book of love and light. I hope that readers, in the end, feel the same hope and conviction and gratitude that Jesse does. Americans are at our best when we live not for ourselves but for the next generation.

LARISON: I’ve written early drafts of four novels since Whiskey, each at play with a quintessential American genre, and I’m in the process of revising them one at a time. (I can draft quickly, but I’m obsessive about revision: every detail must be right, every line must ring true). Each novel grows from a voice that appeared on my shoulder in a quiet moment, and as such, my work-days feel very much like helping a dear friend tell his or her most pressing story. It is an honor and a privilege, one I don’t take lightly, even if I’m having fun doing it.

About the Author: John Larison received an MFA from Oregon State University where he teaches writing. His earlier novels are Northwest of Normal and Holding Lies. He also wrote The Complete Steelheader and worked as a fly fishing guide. Whiskey is in development by Amanda Silver and Rick Jaffa, of Jurassic Park and Avatar sequels.