Characters Are The Travelers Through Life’s Relationships 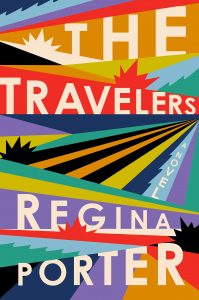 The Travelers tells stories of mostly interconnected families starting in 1946 with “the man James” when he was a four-year-old boy who wanted to know why people need sleep. Agnes Miller meets Claude Johnson when she is 19 in 1966. It seems they are destined to marry until a devastating trauma breaks them apart and Agnes marries Eddie Christie. Eddie suffers discrimination in the Vietnam era Navy and takes drastic measures against his tormentor. Years later, James’ son, Rufus, marries Agnes’ daughter Claudia, weaving the two families together, but challenging James in his dealing with their mixed racial family. Other relatives, lovers, and friends are intertwined with these and live out their stories as well.

AUTHORLINK: Where did you start this story? Who came first into your mind and what was happening?

PORTER: In Savannah and New York, the two places I call home. The Travelers has its heart and soul in people who came before me, whose stories I am obliged to honor and tell because often their stories remain in the shadows. In terms of architecture: the Man James. His story unravels like a fairy tale and tells us how to read the other chapters. It informs the nonlinear landscape of the narrative. In terms of who came to my mind first: well, again, the people of my childhood community. Stories I heard that I did not–when young–have the skill, language or wherewithal to articulate.

“I journeyed with those characters and found connections with them…”

AUTHORLINK: Through what kind of order or pattern or thought process did the multiple characters and their story arcs develop?

PORTER: There was no clear order. And perhaps, in retrospect, that’s the point. There was only discovery. I journeyed with those characters and found connections with them; anchoring their lives through concrete moments of history, music, relationships and the passage of time. I’ve heard several adults say, “But I don’t feel old. I feel like a little boy or girl.” Time plays tricks on us. And time pauses or fast forwards or zips back in this novel.

AUTHORLINK: Since you have many interrelated viewpoint characters, all with their own stories, and they are not in chronological order, how did you organize your story?

PORTER:  One story at a time.

AUTHORLINK: What is the significance of your title The Travelers? How did you arrive at it?

PORTER: There are many ways to travel in this life. We travel through relationships, births, funerals. We travel with our marriages and our vacations.

AUTHORLINK: How did you get the idea of including photos in a novel? Where and how did you select them?

PORTER: I love W.G. Sebald and I also spend a great deal of time reading graphic novels and in comic book stores with my younger daughter. She approaches the world spatially and I think my seeing that opened the door to different ways to tell a story. Stories also mark history. They help us pause and map time emotionally and physically.

“I spent a great deal of time around older people as a child.”

AUTHORLINK: What did you do for research for your eight or more locations and over 50-year time span?

PORTER: I spent a great deal of time around older people as a child. I talked to them. And I talked to my mother. The emotional research lands there. Music also helped me research and chart characters. And then I traveled and spoke with locals when I received a fellowship to do so. Sometimes, I did phone interviews or talked with friends or asked questions about places I could not go. I am blessed to live in New York. New York has travelers from all over the world. We make new.

PORTER: I am experimenting. I can’t say the shape or context this novel will take just yet.

About the Author: Regina Porter is an award-winning playwright who has worked with Playwrights Horizons, the Joseph Papp Theater, and the Women’s Project. Her plays have appeared in Plays from Wooley Mammoth by Broadway Play Services and Heinemann’s Scenes for Women by Women. She was an Iowa Arts Fellow and received a 2017-18 Rae Amour West Postgraduate Scholarship. She graduated from the Iowa Writers’ Workshop. Her stories have been published in The Harvard Review. The Travelers is her first novel. She was born in Savannah, Georgia and lives in Brooklyn, New York.

Write Something That Obsesses You, New Novelist Henderson Advises–2014