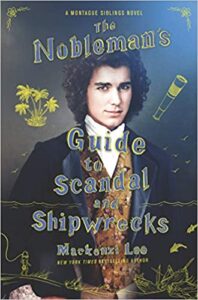 Mackenzi Lee’s New York Times bestselling, award-winning Montague siblings series is set in the 1700s, each following a different sibling having a semi-magical adventure. The series has been described as “empowering and energetic” (Kirkus Reviews, starred review).

Now, in the long-awaited third and final book in the series, THE NOBLEMAN’S GUIDE TO SCANDAL AND SHIPWRECKS (Katherine Tegen Books; November 16, 2021; hardcover), Mackenzi Lee addresses a topic that hits close to home: mental health and the history of mental health treatment. Her main character, Adrian, the youngest Montague sibling, has anxiety, depression, and OCD, something the author has lived with since childhood. As ShelfAwareness notes in their glowing review, “yes, they had anxiety back in the day too.”

Adrian Montague is a bright young man with a promising future-and debilitating anxiety. As the sole heir to his father’s estate, he fears his mental illness, which has gotten worse in the wake of his mother’s unexpected death, will be discovered and ruin the family’s reputation or worse, consume him and all he hopes to accomplish. When a newly found keepsake of his mother’s-a piece of broken spyglass-comes into Adrian’s possession, he’s thrust into the past and finds himself face to face with a brother he never knew existed. Monty Montague has been living under the radar in London for years and his sudden appearance sends Adrian on a quest for answers about his family’s secrets. Secrets that only the spyglass can reveal and that may fill a deeper desire within Adrian: understanding the mental illness he seems to have shared with his mother.

In pursuit of answers about the relic, the brothers chart a course to locate their sister Felicity. But as they travel between the pirate courts of Rabat, Portuguese islands, the canals of Amsterdam, and into unknown Arctic waters the Montague siblings are thrown into one final adventure as they face a ghostly legend that threatens their whole family.

THE NOBLEMAN’S GUIDE TO SCANDAL AND SHIPWRECKS is an “enticing, turbulent, and satisfying final voyage” (Kirkus Reviews) that will delight both die-hard Montague sibling fans and those new to the series. 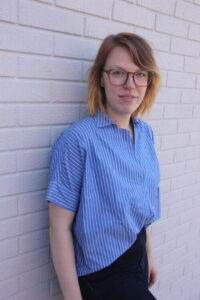 Mackenzi Lee holds a BA in history and an MFA from Simmons College in writing for children and young adults. Her short fiction and nonfiction has appeared in Atlas Obscura, the Boston Globe, Crixeo, and the Newport Review, among others. Her debut novel, This Monstrous Thing, won the PEN-New England Susan P. Bloom Children’s Book Discovery Award. Her second novel, The Gentleman’s Guide to Vice and Virtue, was a New York Times bestseller, an ABA bestseller, has been published in over twenty countries around the world, was awarded a 2018 Stonewall Book Award Honor and the New England Book Award, and is currently being adapted for HBO by Greg Berlanti. The sequel, The Lady’s Guide to Petticoats and Piracy, debuted at #3 on the New York Times bestseller list amid critical praise. She is also the author of Bygone Badass Broads, a collection of short biographies of women in history you probably don’t know about but should, based on her viral Twitter series of the same name, and The History of the World in 50 Dogs, which is the same but dogs. She is currently working on a series for Marvel, which kicked off in September 2019 with the instant New York Times bestseller Loki: Where Mischief Lies and continued in summer 2021 with Gamora and Nebula: Sisters in Arms. She was named to the Forbes 30 under 30 class of 2020 for her work in bringing minority narratives to historical fiction and nonfiction. She lives in Salt Lake City, Utah where she works as an independent bookseller.

Praise for the final book

“The final book of Lee’s sweeping YA historical series…a journey of self-discovery, sibling love, and self­ acceptance.”–BUZZFEED

“This is the anticipated third book in Lee’s Montague Siblings series. The sibling at the center of this installment is the anxious Adrian, who sets off on a seafaring adventure to find his missing siblings and end the curse on his family once and for all.”-COSMOPOLITAN, Best YA Books of2021

“The final book in the Montague siblings series maintains the same high level of whip-smart humor and sensitive social commentary as the earlier titles…Mackenzi Lee has established a reputation for adventures both swashbuckling and socially sharp. And very funny…Packed with political intrigue, romance (gay and straight), angry pirates, ghost stories and more powerful female leaders than you can shake a cutlass at, The Nobleman’s Guide to Scandal and Shipwrecks is what the world needs now.”

“Once again, Lee crafts an absorbing adventure with dangerous stakes, dynamic character growth, sharp social and political commentary, and a storm of emotion. Inseparable from his external search for answers about his mother, Adrian seeks a solution for himself, an end to his struggle with mental illness-a journey handled with hopeful, gentle honesty that validates the experiences of both good and bad days. Characters from the first two books play significant secondary roles, and the resolution ties up their loose ends. Humorous antics provide a well-measured balance with the heavier themes.”

The Lost Sisterhood by Anne Fortier

The Finishing Touches by Hester Browne