The Overdue Life of Amy Byler by Kelly Harms 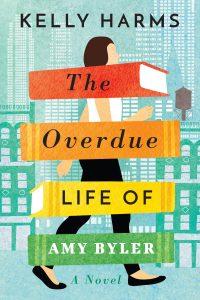 The Overdue Life of Amy Byler

Amy Byler encounters her estranged husband in her local pharmacy, triggering a whole range of feelings. John walked out on her and their son and daughter three years ago. Amy had to step up and become the sole parent. Now John’s back from his new life in Hong Kong wanting to make amends. How should Amy deal with his sudden reappearance? Best friend Lena, ex-nun and wise to the ways of the world, suggests Amy take a week-long sabbatical from parenting to attend a librarians’ conference in New York City. Let John take up the strain for a week coping with two precocious teens while Amy relaxes in a city she loves.

Amy accepts her advice. Contacting her old college friend Tania, now editor of a prestigious NYC magazine, she finds a place to stay and a whole raft of new experiences. Tania inveigles Amy into her magazine’s #Momspringa project involving a total makeover and lots of fun activities around haunts old and new in New York. What Amy doesn’t expect is to fall in love with fellow librarian Daniel, he of the hot looks and amazing personality. The week becomes the whole summer, with John making amends with his children and Amy enjoying her new found freedom from parenting. But as summer draws to a close, Amy wonders what she should do; return to her family, or start a new life with Daniel, a life she feels sure she could’ve had without children to tie her down. A bad accident back home puts Amy on the spot, and she has to decide where her loyalties lie once and for all.

. . .a beautifully realized paean to the strength of motherhood . . .

In The Overdue Life of Amy Byler, Kelly Harms has created a beautifully realized paean to the strength of motherhood and New York City, all in one delightful and insightful story.

Bird & Birdie in a Fine Day by Ethan Long