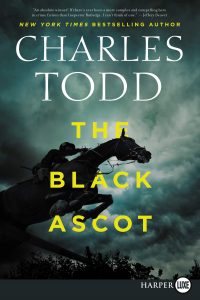 In 1910 two attendees at the famous Black Ascot horse race, Harold and Blanche Fletcher-Munro, left early in their car which later crashed. Blanche died. Harold lived, but he was crippled for life. It seemed the car’s brakes were tampered with. A man seen hanging around the parked cars during the race was identified as Alan Barrington, a man who claimed that Harold had murdered Blanche’s first husband after ruining him financially. Barrington was named as a murder suspect, and an international manhunt was launched—but Barrington seemingly vanished.

Ten years later a chance encounter on a church roof draws a Great War veteran, Inspector Ian Rutledge of Scotland Yard, to the case. He’s given the task of tracking down and apprehending Barrington using new information, no easy task after all the time that has passed. If he fails, the tough old-school Chief Superintendent will likely fire him. As he travels all over England in search of Barrington, Rutledge discovers other players are involved in the case, and all is not as it appears. Then a near fatal experience on his own doorstep throws Rutledge into a shell-shock trauma. On medical leave and without the resources of the Yard to call upon, Rutledge must rely on his own instincts to solve the case. Everything hinges on who saw what at that car crash site ten years ago—and the murderer will stop at nothing to conceal his crime.

Told with skill and a consummate knowledge of war-haunted 1920’s era Britain, The Black Ascot is another triumphant work of detective fiction from the mother and son writing team that is Charles Todd.

A Twisted Vengeance by Candace Robb

Thomas Jefferson: The Art of Power by Jon Meacham