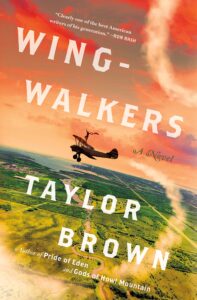 Della Mackintosh inherited a sawmill after her father killed himself during the Great Depression. She finds her life unendurable. Managing the failing business is a headache. Her aunts expect Della to marry an older man for security’s sake. When Captain Zeno Marigold drops out of the Georgia spring sky in his battered old Jenny biplane, Della sees a sparkling bright future which is anything but secure.

… a lyrical anthem to a vanished world that echoes Faulkner’s own style.

WW 1 fighter ace Zeno is a barnstormer, a veteran pilot who can only recapture the adrenaline rush of combat by flying increasingly dangerous stunts. Della joins him as Della the Daring Devilette, a beautiful wing-walker who defies gravity by walking on the airplane’s wings in flight.  They  marry and  fly west, seeking out the promise of fame in Hollywood,  earning their way by performing  death-defying stunts for a handful of dollars.

Future American literary icon William Faulkner is beginning to make a name for himself. An aviator whose ambitions were frustrated by the end of the war, Faulkner’s equally frustrated in love. He and the Marigolds encounter each other at an airshow dedicated to the opening of America’s newest airport, and the encounter becomes the catalyst for an extraordinary adventure.

Brown has the gift for evoking a bygone era in a way that plants the reader firmly into the action. In Wingwalkers the landscape of the Deep South and the fully fleshed characters come to life in a lyrical anthem to a vanished world that echoes Faulkner’s own style. 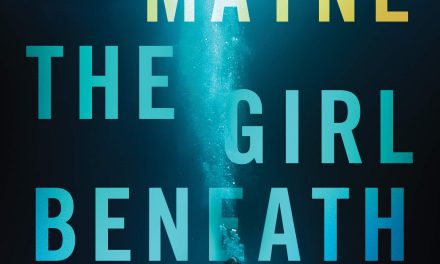 Book Review: The Girl Beneath the Sea by Andrew Mayne

The Bride Collector by Ted Dekker