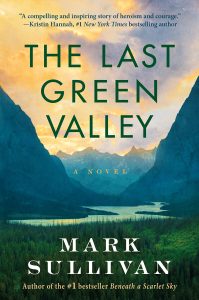 Adeline and Emil Martel and their two young sons are Volksdeutsche, descendants of German immigrants encouraged by Catherine the Great to settle in southern Ukraine. For centuries the outside world largely passed their people by, but the Russian Revolution followed by World War II bring changes for the worse. The Nazis come as “liberators” of their fellow Germans—and exact a terrible price for their protection. Emil and other Volksdeutsche men are expected to play a part in the Final Solution, Hitler’s plan to exterminate Jews and Bolsheviks. After the terrible Battle of Stalingrad the Nazis retreat in the face of burgeoning Soviet strength. By March 1944, the Martel clan risks being caught between the two brutal ideologies of Hitler and Stalin. They flee from their homes.

As the Soviet armies advance, the refugees’ Long Trek westward across Europe becomes a nightmare. Swept up by battle, death, and disease, the Martels plod grimly onward, fueled by the thought that one day they will settle in a fertile green valley surrounded by mountains where they can live their lives in peace. Away from the battlefront, the clan find themselves unwanted and sometimes even a hated burden on the local peoples. As the war grinds to a close the Soviets occupy eastern Germany and begin exacting terrible revenge on the Germans. Adeline and Emil tread carefully, trying to protect and feed their family as best they can, but shifts in fortunes lead to family members becoming separated. The Martels encounter the best and the worst of humanity. Only their enduring faith and belief in each other can see them through.

After his triumphant novel Beneath a Scarlet Sky, Mark Sullivan delivers another stunning tour de force. Based on interviews and careful research, The Last Green Valley is the novelization of an inspirational true story featuring human strength, faith, and endurance against all odds.

Beneath the Sands of Egypt by Donald P. Ryan