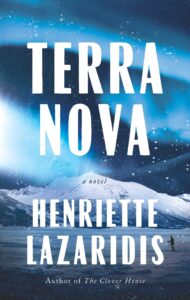 In 1910 a British polar expedition is in a race against a Norwegian team to be first to plant their national flag at the South Pole. Led by Captain Heywoud, the British team includes his good friend Watts, staunch comrade on countless mountaineering forays across Europe. They left behind in England Heywoud’s wife and Watts’ lover, photographer and Suffragette Viola Colfax. Watts introduced the couple, but Heywoud doesn’t know that Viola and Watts resumed their love affair. In England Viola feels the men’s absence keenly. As a distraction she photographs Suffragette marches across London. The more Viola identifies with the Suffragettes, the more she comes to resent her husband’s paternalism.

Her burgeoning career brings Viola into contact with the elite of the Suffrage movement, the hunger-strikers force-fed in Holloway Prison. An idea for an exhibition featuring the women leads to difficult decisions, not helped by the men’s triumphant return from the Antarctic. Heywoud has discovered her guilty secret. As punishment Viola’s forced to avoid Watts and develop the photographs he took during the expedition. What Viola learns from one of the photographs shocks her to the core. Her husband and Watts share a guilty secret far worse then infidelity, one that, if exposed, will mean ruin for all concerned. Can Viola find a way through her dilemma without bringing down all she’s worked so hard for?

Terra Nova is a deeply compelling novel. Heywoud, Watts and Viola Colfax are fully alive on the page, and the reader feels for them as they each find their way through the intricacies of love, adventure, loyalty and ambition.

Buy this book at Amazon

A Century of November by W. D. Wetherell