Review: How to Murder a Marriage by Gabrielle St.George 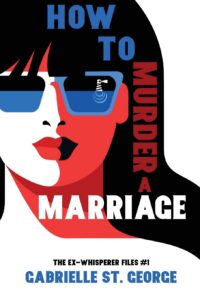 How to Murder a Marriage

Gina Malone, the “Ex-Whisperer,” has an enviable record in helping people leave abusive relationships. With her messy divorce behind her, she knows what she’s talking about. Her online advice column is doing great, but there are pitfalls. Advising one abused wife, Lillian, to leave her husband attracts this man’s hatred. Now Gina thinks he’s stalking her. She’s seen it all before. Her ex has stalked her for years.

Gina decides to make a new life by moving back to her hometown of Sunset Beach on Lake Huron. Even the prospect of dealing with her eccentric Italian aunts doesn’t put her off. Besides, there are compensations in the form of Gina’s lovely cousin Florrie, and Hugh McTavish, the hunky local builder Gina hires to refurbish her home.

… a fun and intricate story with terrific characters …

Trouble starts when Gina realizes Lillian’s husband has somehow followed her. Certain clues suggest he’s getting desperate to find Lillian and believes Gina knows where she is. The local cops are sympathetic but say they’re powerless until the guy does something blatantly illegal. Gina needs the help of Florrie and the increasingly attractive Hugh to keep it all together, but when Gina’s ex appears in town and joins forces with Hugh’s crazy ex, events really begin to spiral out of control. Can Gina figure out a plan to thwart them all before it’s too late? Maybe a dark and stormy night will give her the chance she’s looking for.

How to Murder a Marriage is written from the heart. Gabrielle St. George draws from her own considerable experience to create a fun and intricate story with terrific characters and a surprising twist at the end.

The Appearance of Annie Van Sinderen by Katherine Howe