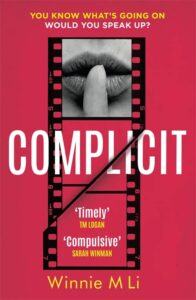 Winnie M Li, in her upcoming novel, Complicity, loops us back into the MeToo# movement. Though often tedious and definitely nightmarish, her elegant and sophisticated prose nevertheless focuses on sexual exploitation of women seeking to advance their careers.

It all unfolds in the character of Sara Lai, whose passion for film leads her into a trap she can only escape by revealing the truth about her own assault. After graduating from Colombia University, Lai takes an internship with Firefly Films, a production company owned by Sylvia Zimmerman, whose main client is Xander Schulz. Lai plays a critical role in writing Schultz’s scripts which nets him a Golden Globe but Lai is barely mentioned in the credits.

… a clarion call on the continuing importance of speaking up.

Fast-forward ten years, and we discover Lai teaching screenwriting at a small college when New York Times investigative reporter Thom Gallagher seeks to interview her about her time in Hollywood, specifically about another Schultz film she produced. Lai revisits that year in LA slowly, but Gallagher remains patient. She details her life as an Asian-American, her family values, and her parents’ disappointment over her choosing the film industry as a career.

It was at Cannes, she explains, when Schulz’ film is first recognized, British billionaire Hugo North offers bundles of money if he can become a partner in Firefly Films. It’s an attractive proposal that would ensure the production of Schulz’s next endeavor. In the film industry, Lai observes, “There is a power imbalance. The powerful prey on the weak. The weak become disposable, expendable, then vanish.”

Determined to succeeded, Lai falls victim to North as she works in LA on Schulz’s new film. In hours of taped interviews, Lai relives her painful experience, and her failure to come to the aid of other women involved in the film.

Author Li’s prose rings true since she not only knows the film industry as a producer herself, but also because her own work was interrupted when she was violently raped in London and suffered multiple injuries. Subsequently, she founded Clear Lines, a UK festival on awareness on assault. Even though strides have been made in disclosing sexual assault in the workplace, her novel is still a clarion call on the continuing importance of speaking up.

By Chance by Martin Corrick

Horoscopes for the Dead by Billy Collins