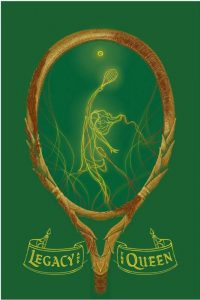 Legacy and the Queen

If there are any doubts Olympic gold medalist and NBA champion Kobe Bryant can tell a good story, his young reader book, “Legacy and the Queen,” written by Annie Matthew, dispels them. The book is also a work of art, designed by Karina Granda, depicting magic strings woven into a tennis racket owned by story hero, 12-year-old Legacy, who seeks the impossible to improve the lives at an orphanage she and her father operate.

It’s a tale of the future, when a large fire breaks out in the world of Nova. Silla, a former tennis champion, extinguishes the flames, so she was made Queen of this magical kingdom. But all is not perfect. The majority of the Nova population people live in poverty, are forced to work in labor mines, and those who protest are imprisoned. The wealthy and governing officials live with inside a walled city.

Once a year, the queen invites those who live in the provinces —factory workers, miners and their families who inhabit “scrap-metal shacks” — to compete in a tennis tournament outside the city walls. The winner gets a cash award and the right to attend the tennis academy inside the city walls. Winning became important for Legacy because without it, she and her father could not continue running the orphanage.

. . . a perfect book for anyone, not just athletes.

Legacy discovers life within the walls of the Castle are more sinister than she imagined. Associated with the tennis games are bribes, threats, and most intriguing, and tennis rackets with magical powers. Legacy has to focus, to avoid anger, and play “for the simple pleasure of playing,” if she wants to win.

This coming-of-age story for young athletes is heartwarming, with numerous valuable messages. Kobe, who founded Granity Studios, says it’s a way to tell stories in a multi-media concept to inspire “the next generation of athletes to be the best versions of themselves.” And in the case of Legacy, it’s a perfect book for anyone, not just athletes.

Books to Die For by John Connolly and Declan Burke

The Great Man by Kate Christensen