Review: The North Face of the Heart by Dolores Redondo 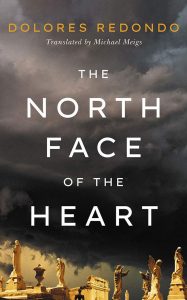 The North Face of the Heart

Spanish author Dolores Redondo’s wildly popular protagonist, Investigator Amaia Salazar, is back for another adventure in Redondo’s just-translated thriller, “The North Face of the Heart.” This time, Salazar assists the FBI to track down a serial killer.

Salazar had demonstrated her unique abilities in behavioral science to develop profiles of both the criminal and crime victims while working as an investigator in Pamplona, Spain. Now, Salazar is attending a FBI training session In Virginia, when Aloisius Dupree, an FBI veteran familiar with her unique skills, asks her to join the team on the serial killer hunt.

The case involves someone who is murdering entire families in the wake of a natural disaster. In each instance the family makeup is identical: parents, three children and a grandmother. Salazar profiles the perpetrator as an Evangelical assassin, someone who thinks he is carrying out a divine act. “He identifies those who have sinned and redeems them with death,” she says.

Anticipating that Hurricane Katrina will provide the next opportunity for the assassin to kill yet another family, the FBI team and Salazar head to New Orleans. Redondo introduces genuine characters who were abandoned and experienced the death of hundreds of residents during the 2005 catastrophic storm.

Amid this mayhem and disaster, Dupree’s memory of a past case during another hurricane in 1996 begins to haunt him. Young girls were then kidnapped during the storm for sex trafficking, he recalls, and now it seems like this was happening again.

This tense and fast-moving thriller is fused with superstitions and religious rites. Like Dupree, Salazar remembers the evilness she encountered in Spain, eerily similar to what she is now exposed to in the swamps of New Orleans.

Redondo offers scientific explanations to counter the magic rites infused in the narrative, but as Salaza says, it all comes down to what you believe is real. With a complex and intriguing character like Salaza, you can expect more thrillers to follow from Redondo.