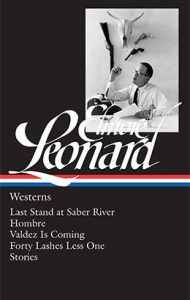 . . . a story eventually purchased and adapted into a movie, he received 84 rejections.

Among them is “Hombre,” adapted into a movie starring Paul Newman, about a bi-racial man (Mexican and Anglo) raised by Apaches. He’s chastised by stagecoach passengers until they need him to fend off outlaws.

As a student in the 1940s, storytelling came naturally to Leonard, and in the military he began writing short stories. But it wasn’t until he moved to New Mexico in 1948 that his western writing developed. Deep takes on western landscapes and Native Americans coupled with brawny characters showing compassion for the disenfranchised lead to his early accolades. Like all Leonard’s writing, the stories feature a bizarre twist but believable plot.

His other popular novel, “Valdez is Coming,” involves a conflict between Frank Tanner, wealthy rancher and arms smuggler, and Bob Valdez, a Mexican-American town constable. Tanner purposely misidentifies a black man holed up in a windowless cabin with his wife as a murderer, prompting Valdez to return fire and kill an innocent man.  Valdez begins a quest to force Tanner to pay the widow compensation for her husband’s loss, a violent struggle between good and evil in the West.

“Last Stand at Saber River” is a tension-filled novel about a Confederate veteran and his family who return to Arizona to claim his ranch, now occupied by Union soldiers. “Forty Lashes Less One” weaves a friendship between an Apache and African-American in the Yuma Territorial Prison.

“The Tonto Woman,” a charming short story and later a screenplay nominated for an Academy Award, reads like a fairy tale. A cowboy spies a tattooed woman and learns she was captured and marked by a Mojave tribe. When released, her husband banishes her to live alone in cabin on his expansive ranch. Ruben Vegan convinces her she is beautiful and unique, but as he arranges reconciliation with her husband, Vegan also rustles the rancher’s cattle.

Leonard died in 2013 at age 88, still writing, information detailed in the chronology which also shows his was not an easy life. But his perseverance paid off: For a story eventually purchased and adapted into a movie, he received 84 rejections.

The Like Switch: An Ex-FBI Agent’s Guide. . .by Jack Schafer, Ph.D., and Marvin Karlins, Ph.D