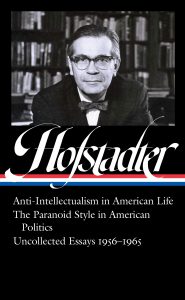 The Library of America.

Pulitzer prize-winning historian Richard Hofstadter possessed a genuine feel for trends in American society. Writing in the 1950s and 60s, the time of McCarthyism and Goldwater, he observed the way paranoia and irrationalism influenced politics and culture, of which the phenomenon of Senator McCarthy and his notorious witch-hunts were but a part. Hofstadter touched upon the history of anti-intellectual episodes in pre- and post-Colonial America dating back to the first colonies and continuing through the Revolutionary War period and beyond. He examined the legacy of America’s Founding Fathers and analyzed the way in which respect for intellectuals such as Jefferson and Adams gave way to demagoguery and conspiratorial thinking.

. . . sure to find a place on the bookshelf of any researcher and student of trends in American history.

Hofstadter’s work is especially important in our current age, where right-wing conservatism, religious fundamentalism, public irrationalism and anti-intellectualism are once more trending in American society. Now as in Hofstadter’s day intellectuals are not taken seriously and indeed are regarded with suspicion. Lessons can be drawn as to how such attitudes can have a direct bearing upon society’s means of coping with disasters such as the COVID-19 pandemic when the warnings of perceived intellectuals are sidelined or ignored.

Editor Sean Wilentz has created a selection of Richard Hofstadter’s most important works drawn from his uncollected postwar writings. This Library of America edition is sure to find a place on the bookshelf of any researcher and student of trends in American history.

To Be Queen by Christy English

The Guards by Ken Bruen