Book Review: The Life Below by Alexandra Monir 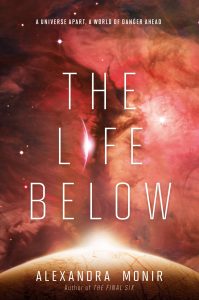 Naomi Ardalan is one of the Final Six, a specialist team sent out from a dying Earth to establish a new home for humanity on Jupiter’s moon, Europa. Heartbroken over leaving her family and friends behind forever, Naomi has also lost her boyfriend Leo Danielli. Leo washed out of training camp through political machinations which saw the American president’s arrogant nephew chosen as a team member instead. The spaceship Pontus leaves Earth, but her crew are still under the thumbs of the ruthless heads of mission, Dr. Takumi and General Sokolov—who may not have their best interests at heart.

… a science fiction story based on a future which may become all too real.

Sabotage hits the Pontus en-route to a resupply stop in Mars orbit. Naomi is chilled when she realizes someone in her crew is responsible—but who? And why?She also has serious doubts about the vaccine based on an alien life form the crew must take in daily doses to resist deep space radiation. What is it really doing to the crew? However, all is not lost. Billionaire genius Dr. Greta Wagner offers Leo a way to help Naomi and the Pontus, but both Greta and Leo must take terrible risks. Danger above Mars, danger on the surface of Europa. Naomi, Leo, and the crew of the Pontus face hideous odds where one slip-up will be fatal not just for themselves, but the future of humanity.

The Life Below is a genuine page-turner of a science fiction story based on a future which may become all too real. Naomi Ardalan and Leo Danielli are fully-fleshed characters the reader wants to see triumph at the end.

The Map of the Sky by Felix J. Palma

The Dark Lantern by Gerri Brightwell

The Fisher King by Melissa Lenhardt